It is that time of year when everyone is reflecting on the last 12 months. We are no different at Smart Girls Love Sci Fi. We turned 5 years old this year! We’ve had good times, read great books, viewed awesome TV series and anticipated a few good Sci Fi flicks.

It’s our turn to talk about our favorites. Echo and I have come up with our picks in TV, movies and books. Well, Echo has contributed all the movie favorites. But we both have some opinions on TV and books. Neither of us have time to watch or read everything that is out there. So tell us in the comments: did we include your favorites, or did we missed something really great.  Follow the text links in this post for even more opinions on why we like these stories or for more insight on some of the authors we picked.

Sleepy Hollow – I really enjoyed the first season of this show. Abby is a wonderful heroine (as well as her sister Jenny). Ichabod Crane, come back to life in the modern day, mixed with witty dialog and end of the world prophecies. Watching Season 2 now. Not quite as strong, but will wait see.

Defiance – I like this series. The mix of humans and aliens living in a post-alien war world is fun to watch. A few characters, particularly Jaime Murray as Stahma Tar, really keep it moving.

Continuum – Time travel and hard tech SF. I devoured season one of Continuum about the cop from the future coming back and vowing to stop a group of terrorists. The social messages about corporations, freedom, privacy, and control are mixed in well with plots that really make you think.

Orphan Black – Another one of my favorites. I love watching the ongoing saga of Sara and all of her various clones. Plus, the plot gets deeper and wider as it goes on.

Haven – My SciFi challenged husband likes to claim I have Troubles. I tell him that just proves he was actually watching the show he thinks is stupid. I think everybody has Troubles of some kind and maybe that is why I enjoy Haven. The Troubles are always resolved. Plus the variety of age of characters makes it more appealing that the 20-something shows. The series fantasy scope broadened each season and wound up this year in a grand finale featuring William Shatner.

Orphan Black – Oh sure, Orphan Black has a great plot, full of bad guys, heroines, intrigue and science. But the real reason I watch it is to see the wondrous transformation of Tatiana Maslany into each clone she plays.

Defiance – After the violent season opener this last year I almost stopped watching. But I am glad I didn’t. An earth full of multiple alien races has so many story line possibilities. Those story lines do branch off in a multitude of directions, some good, some not so good. But at the root of the series is a town just trying to survive and doing whatever it takes to do so. 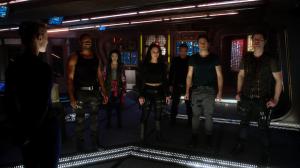 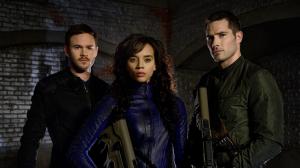 Dark Matter, Killjoys – I am listing these two as one. They premiered at the same time, ran on the same night and were talked about in the same circles. And the reason I enjoy them so much is the same for both. Great characters! Plus Killjoys has a talking ship and Dark Matter has a lot of surprises.

Truthfully, I did not have a lot of SF/Fantasy movies that blew me away this year. Some serviceable installments of franchises, to be sure, but then I did not get to see a great many films. The Martian, unfortunately, won’t be in my neck of the woods until February. I loved the book and looking forward to it on the big screen. So the three that I loved…

Interstellar (on Blu-Ray) was a movie I really enjoyed. The hard science basis was great and personally I was fond of the robot. I enjoyed Inception so I expected to enjoy this too. I was not disappointed.

Mad Max: Fury Road was a surprise for me. I know the Mad Max movies but wasn’t much of a fan. I happened to watch Fury Road and loved it. Furiosa is a fantastic action heroine. 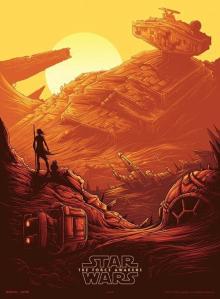 Star Wars: The Force Awakens, but then, there was little doubt it would be on my list. The classic look of ships, clothes, and some brand new characters. Eagerly awaiting the next installment.

Nightfall by Robyn Bachar – Space opera with intrigue. A F/F/M romance with strong, capable heroines and a solid love story among the three. Very good.

Restoration by K.S. Augustin – I reviewed it for the SFRQuarterly and I do really like it. An interesting take on age differences in romance and asks hard social questions. Plus, more of a low key, sweet, cerebral romance.

Land of the Beautiful Dead by R. Lee Smith – This is a writer that never fails to push boundaries and redefine tropes in her own terms. This time she takes on zombies.

Iron Admiral by Greta van Der Rol – This is not a new one, but its been re-released and now as paper copy. I enjoy her writing because the women are always smart and I love to see a heroine show off her intellect without hiding it in the background.

Loving Among the Dead by Dahlia DeWinters – Zombies. Apocalypse. A love story. And her blog, Boho Writer Chick, is a lot of fun to read.

Echo 8 by Sharon Lynn Fisher – My first post for Smart Girls Love Sci Fi was my review of Echo 8. So this book will always be a little special if just for that reason. It also happens to have an original concept that I really enjoyed.

Inherit the Stars by Laurie A. Green – Inherit the Stars is top-notch space opera that has quite a few plot twists. I like surprises!  I also enjoyed great characters that took me along for quite the rollercoaster ride.  In 2016, I will be looking forward to a new story set in the same universe.

Dark Horse by Michelle Diener – In Dark Horse an ordinary woman does extraordinary things far away from home. A person can go pretty far with a sentient ship for an ally.  On January 4, the second book in the Class 5 series, Dark Deeds, will be out.

Traitor by Jody Wallace – Traitor has yet another sentient ship. I’m sensing a theme. This particular ship is nosy and has a delightful sense of humor.

Tea Time Reading – Of course I have to include steampunk titles!

The Clocks of London by Lyn Brittan – Creative underwater setting.

Curse of the Brimstone Contract by Corrina Lawson – More brainy characters. Plus the heroine is a seamstress.

Do you have a favorite that you want to shout about?  Tells us in the comments.