Robyn Bachar enjoys writing stories with soul mates, swords, spaceships, vampires and gratuitous violence against the kitchen sink. Her books have finaled twice in the PRISM Contest for Published Authors, twice in the Passionate Plume Contest, and twice in the EPIC eBook Awards. As a gamer, Robyn has spent many hours rolling dice, playing rock-paper-scissors, and slaying creatures in mmorpgs.

All of them! I’ve always been an avid reader. Growing up I was addicted to Nancy Drew and the Babysitter’s Club until I found my first Star Trek: The Next Generation novel, and after that I devoured every Trek and Star Wars novel I could get my hands on.

I love the security of knowing that no matter how bad things get there will be a happily-ever-after at the end of romance novel. When I read outside the genre I find myself cringing in fear that a character I like is going to be killed (“I am a leaf on the wind…”) or that things are going to end horribly.

I’ve been a sci-fi fan since my dad introduced me to classic Star Trek, and in particular I’ve always been drawn to the sweeping adventure and drama of space opera. I was a HUGE Star Wars fan before the prequels came out. I’m cautiously optimistic about the new trilogy.

I like to be able to relate to a character, particularly to their flaws because perfection is boring. I love snarky characters. I love seeing how characters click in romance—how they complete and complement each other. In my Cy’ren Rising trilogy Jace started out as a typical spoiled nobleman with a problem with authority. I enjoyed writing every humbling moment of Brynn taking him down a few pegs.

Dreams. I get a lot of inspiration from dreams, and I keep a notepad by my bed to write ideas down before I forget them. I also tend to get ideas for great lines while I’m in the shower—maybe there’s something inspirational in the scent of shampoo.

My Cy’ren Rising trilogy is available in ebook now, and the second and third book will become available in print in September and December. The second book, Morningstar, recently won second place in the Sci-Fi category of the Passionate Plume awards and third place in the erotica category of the PRISMs. So yes, it has a high heat level and each book features a ménage romance, but it’s also a space opera with epic space battles, political intrigue, and zombies.

And some fun questions ..。

SGLSF: If you were trapped in a fandom universe, where would it be and why?

Oooooooh. I love this question. I feel like the choice comes with conditions, though, particularly since trapped implies peril. Like, I’d like to live in the Firefly universe but only if I could be a part of the Serenity’s crew. Or I’d like to be in the Star Trek universe if I could be a part of Starfleet on the Enterprise D, preferably in medical or science so I don’t endanger my life by wearing a red shirt. I think ultimately I’d like to be a companion in Doctor Who with the 10th doctor, so I could travel space and time and have epic adventures.

SGLSF: If you discovered someone close to you was an android, what would you do? 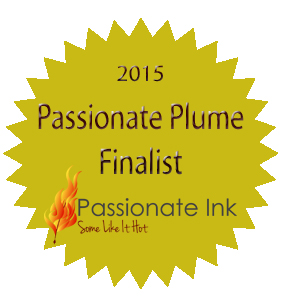