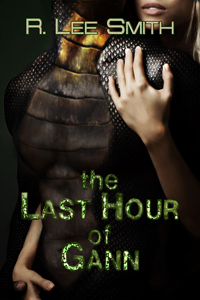 Part two of the interview with R. Lee Smith.

RK: What are some of your upcoming projects?

RLS: The next book will be out this summer. It started as a novella, something quick I could bash out and throw into the Freebie Room at this year’s RT Convention in New Orleans, but as usual, once I started typing, I couldn’t shut up. It’s now at 75,000 words and will probably be on the other side of 80 before it’s done. The story is my response to the onslaught of zombie apocalypse themes that have been inundating the entertainment industry lately, titled THE LAND OF THE BEAUTIFUL DEAD. Here are 500 words (roughly) of shameless self-promotion!

Lan ate another grape and thought. At last, she said, “Do you control the dead, like puppets, or just bring them back and let them go, like a toy you wind up and release?”

He lifted his head and stared at her a moment before resuming his meal. “The latter, although there are degrees to which I ‘wind’ my toys.”

“So the only ones you control are the Eaters.”

“Then why do they attack us?”

“In all creatures, there exists the animal urge to kill and feed. Humans imagine themselves a civilized exception, but those you call Eaters betray their true instincts, when all the manners and moral constraints are relieved. No, I do not aim them at your settlements and cry havoc, I merely wake them to a sense of hunger with no sense of consequence.”

“I could have raised them with all their animal urges intact. Imagine, if you will, the endless tides of the dead seeking actively to drive invading rivals from their territory.” He took a deep drink from his cup and smiled at her. “Or to mate.”

She could not quite keep the thoughts that rose in her at that off her face.

“But no, my intent was one of benign co-existence,” he went on. “The Eaters are not meant to exterminate humanity, not even to plague it, but only to keep it at bay so that I and my few favored may live in peace.”

“Not plague us? How can you even say that?”

“And how can you claim otherwise?” he countered. “They are the very least of my creations, the very palest spark of life, lacking intelligence or memory or even the slightest blush of self-preservation. Can you deny they are confounded by the least defenses? A wall that even a child could climb will hold back their multitudes indefinitely. A simple latch that a dog might be taught to paw at will forever remain beyond their ability to open. And you can well afford to wait them out as they mill around your settlements, can’t you? Their flesh has no integrity, for I have raised them to rot. Even in this poor corner of the world, they are reduced to harmless bones in months. It is human perversity that demands you cleave to your holdings here, for in other warmer, wetter climes, no Eater can retain cohesion more than a few days. And what the elements do not undo, the hungry hordes of insects and animal life consume. Still, you must imagine yourself beset and waste precious resources and even more precious lives to plink away at an enemy that would be of absolutely no threat to you if you just left them alone!”

His sudden shout at the end of what had been a calm, if caustic, speech made her flinch. He stopped there, glaring and breathing hard through the mouth-slit of his mask, then waved away the guards who had looked in at them and leaned back in his throne.

“But humans will never leave the Eaters alone,” he said, once more calm. “No more than they will leave me and my Children alone. The dead are an offense to the living and always have been. I understand that and I accept that there shall never be peace, but still I have made my Haven. And Man, who could as easily build cities of his own, has instead chosen the most senseless vengeance—the killing of the dead.”

After that, I will be back to work on POOL, a novel which takes me back to my beloved B-horror movie roots, about a subterranean race of almost-humans and a small group of friends in a very isolated place who are about to meet them.

After that, I have a number of books pinned to my Write This Down wall, including THE BULL OF MINOS (my take on the tale of Theseus and the Minotaur), THE BONE TREE (my first book where a kid is the hero), and something with the working title of DJINNI. Look for snippets on my blog, (http://rleesmith.wordpress.com)as release dates approach.

RK: Do you have a guilty pleasure or terrible movie you like to watch?

RLS: I have to say yes, although no one thinks I feel guilty enough about it. My inordinate love of bad horror movies is infamous among my family. Of the two or three thousand (yes, really) DVDs on my shelf, more than half are horror movies, and more than half of those are terrible. Back when the Syfy channel actually PLAYED MOVIES ON THE WEEKEND (!!!! Listen up, Syfy executives who are surely reading this !!!!) instead of running marathons of their pointless, predictable and thoroughly un-entertaining series, you couldn’t get me out of the house if it were on fire. I actually own copies of movies like Shrooms, Cyclops, and Rock Monster, and Charles Band is like a god to me.

RK: Which would you rather be able to do: read minds or see other people’s dreams?

RLS: As anyone who has ever read THE SCHOLOMANCE could probably guess, I think telepathy would actually be a pretty awful “gift” to get saddled with and I can’t imagine that other people’s dreams would be any cooler than my own, however, I would love to be able to astrally project or otherwise take on an invisible, non-corporeal form. But then, if I could, I’d probably stop writing novels and become a supervillain, so it’s likely for the best that I remain a boring old human.