Greta Van Der Rol is the author of many SF and SF romance novels including the Morgan Selwood Supertech series and the Ptorix Empire Stories. She is one of the featured writers in the Nebula Nights anthology.

(Greta van der Rol also writes paranormal fiction and we’ll talk more about that in the second half of our interview. So stay tuned.)

RK: Why did you decide to be a writer?

GRETA: I get the idea you don’t really decided. It just happens. I wanted to write for many years, and tried once or twice, but life intervened with the need to make a living. Besides, I loved being a computer programmer. It wasn’t until I was nearing retirement that I thought I really could make a new career for myself.

RK: How do you approach writing SFR? Do you start with characters or worlds? Do you have a writing routine?

GRETA: I always start with characters. In the PTORIX EMPIRE books, the Iron Admiral, Chaka Saahren, was the first to take up residence in my mind. I hadn’t finished writing the first Iron Admiral story when Morgan Selwood put up her hand for a different universe.

I guess my only routine is that (when I’m not slacking off completely) I try to write every day. I’m not quite a plotter, but I can’t just write without having some idea of where I’m going. I might well take an unexpected turning – but that’s a different matter.

RK: How do you strike a balance between the SF in your novels and the romance? What do you think readers expect?

GRETA: That’s such an interesting question. I had to be taught that romance readers expect a happy ever after or happy for now ending, other wise they feel cheated. I’m not a romance reader, you see. Never have been. I’ve always seen my stories as space opera with a romance. And I do believe lots of readers are more than happy with that approach.

RK: You do a lot of social media particularly with the SFR Brigade. How do you see the future of SFR? What do you think writers and fans can do to support the genre?

GRETA: Self-publishing, or small indie publishing, is a difficult row to hoe. Let’s face it, even the big boys are finding it hard going out there. It’s pretty clear to me that we can get further as a group than as individuals, especially since we have a niche market. And it’s easy to work with the people in the SFR Brigade. They’re generally a great bunch of people, willing to share their expertise.

The best thing our fans can do for us is tell others about our books, be it by word of mouth or with reviews. Sometimes it’s hard not to become a little despondent in my own little writing puddle. It means the world to me to know that people enjoy my novels, that I’m not just writing for me. 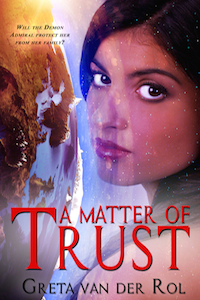 Her latest release is a space opera novella A MATTER OF TRUST.

Will the Demon Admiral protect her from her family?

Princess Amira is ready to start a new life after the death of her husband, but that doesn’t include marrying the man her father picks out for her. Pursued by his agents, she races across the galaxy in a desperate search for a safe haven. Amid simmering tensions at the edge of the Empire, Amira renews her acquaintance with Imperial Admiral Ul-Mellor. Although his detractors call him the Demon Admiral, Amira finds him intelligent, articulate, and very attractive.

But Ul-Mellor is not human and Amira is a princess – far above Ul-Mellor’s status on his home world. He and Amira will have to overcome a gulf of cultural and class differences if they’re to turn their mutual attraction into a relationship. And what will Ul-Mellor do when faced with a choice – Amira or his hard-won commission?