Last week I went to the movies. While I was there I was feeling pretty shocked and ashamed.  No, it was NOT the kind of movie you’re thinking. I was shocked by the price for a matinee. Tells you how long since I’ve been to the movies.  I was ashamed because I went to see Olympus Has Fallen instead of seeing The Host—which was SFR and I could have blogged about it. *sigh* One good thing did come from the experience. Before the movie started there was a promo for Defiance, the new SyFy Channel series starting April 15.  This was the first I’d heard of it. Not sure how I’d missed it, but missed it I had.

I immediately came home and started researching. SyFy has a cool little “the making of” series of videos on their website. As I was watching those, my son walked by and mentioned he’d been playing the game for several weeks. Yes, we live in the same house and I had no idea. And no, I’m not a terrible mom. He’s a grown-up and I stopped monitoring his games and TV when he moved out at age 18.  We’re one of those families where the kiddo has come home again during economic hard times. I can’t complain. I did the same at one point in my younger years.  Besides, I actually like the kiddo. 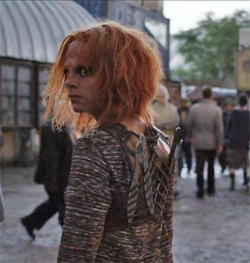 But back to Defiance.  The series takes place after Earth has been devastated by war and aliens have come to live among us. Defiance is a town that is making the best of things and everyone is trying to live together in peace. There are some good actors involved with the project and it seems to have a large cast.  There are competing families, one human and one alien. There is the mayor of the town and her brothel-owning sister.  Newly arrived in town, an ex-military officer and the alien girl he raised as his own. The girl, Irisa, looks the most interesting me. The girl has many, many knives, a bit of a temper, and not much of a sense of humor.

So, everything was looking good and then it happened. They said the words that made me cringe. They likened the central storyline to a Romeo and Juliette story. The two warring families apparently have two kids in love. Why is this a problem for me? Well, Romeo and Juliette is a tragedy. I’m not much a fan of tragedy. Sure it is a romantic tragedy, but I like my romance with a happily ever after. I know when I watch SciFi TV the happily ever after isn’t likely. TV tradition says that if a couple gets together happily the show will fall apart. I accept this, but try to avoid shows were the romance is central. For example, I knew FireFly would never have gotten Mal and Inara together (even if it had gone on for years), but their relationship was not the center of the show so that was fine. Putting a Romeo and Juliette story at the center of the show is a big red flag for me. And this is very sad considering how little SiFi is on TV right now.

The dilemma: should I give the show a chance? I hear from the game players that the game is tons of fun. Will that translate to the show?

Rae Lori has promised to post on the game side of things, so be sure to keep an eye on her blog.

12 thoughts on “Defiance, from yahoo to oh no.”