Everywhere you look this time of year there are holiday deals, so I’ve got one great deal for you–three author interviews in one. Today on the blog we have three great scifi romance authors who have teamed up in an anthology released December 3rd. A Galactic Holiday features three futurist tales set during the holiday season and was edited by the awesome Angela James.  If you happen to remember my long ago post Are there no holidays in the future?, you’ll know this anthology thrills my little SFR heart. Here is little about the stories and their authors in my interview with these talented ladies: Anna Hackett, Sasha Summers, and Stacy Gail. 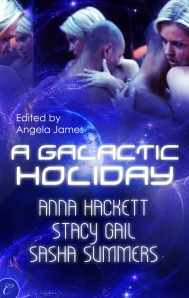 Charlee:   Hi ladies! After checking out your bios I had to start with a joke for my blog readers, so here goes. What do a figure skater, a gypsy, and a mining engineer have in common? Right now I can almost hear readers saying ‘no way’ because the answer has to be: they all write SFR and they are teamed up for this anthology. But it’s true! Can each of you tell us how these things have influenced your writing?

Anna:   Thanks for having us, Charlee! LOVE the joke…we are a unique mix, a bit like our anthology. So, I didn’t grow up wanting to be a writer…I was too busy reading. I’ve been a voracious reader since I was young and raided my mother’s romances and my father’s action-adventure thrillers. As an engineer, I work with numbers a lot…I like to think writing gives me a chance to use the other side of my brain!

Sasha: I think my love of story-telling comes from my family. I grew up playing Barbie dolls in the aisles of whatever community theater my parents (sometimes my sisters and I, too) were currently performing–from Texas to Holland. When we weren’t at the theater, we were taking long road trips exploring castles, caves, you name it. Those long drives often led to daydreams… which I eventually started writing down.

Stacy:  HA!  Holy cats, we’re a weird bunch, aren’t we?  Ah well, you know what they say—“normal” is just a setting on a washing machine. 😀  As for whether or not figure skating influenced my writing, it totally did!  When I was a competitive skater there would be long stretches in between events, so I passed the time by writing all sorts of stories.  My first 300-page book was completed when I was fourteen (it was heinous, btw *snort*)

Charlee:   One of the things I love about SFR is there are many directions it can take. In this anthology there is space adventure, colony romance, and cyberpunk. Can you each tell me what drew you to the particular type of story you contributed for this anthology?

Anna:  Space adventure, I LOVE that tag! I knew I wanted to explore the winter holiday of Yule and instantly envisioned a distant ice-world called Perma. After that, came the characters: the environmentally and family minded, Brinn and the hero, Savan from the high-tech, energy dependent world of Rendar. Definitely opposites. And like I said before, I love some action-adventure so it was a given that these two will do more than kiss under the mistletoe.

Sasha:   I’d never tried anything like this before. Riley, my heroine, came to me first. She was a fully formed, self-sufficient, chick – something I’d never written before. Leo, my hero *sigh*, was a natural compliment to her… And the rest just flowed. I hadn’t planned what type of story it would be, really. Reading Angela James submissions call kind of flipped a switch and I thought, why not. When she called me to tell me the story had been accepted, I giggled for a good ten minutes – she was very nice about it. J

Stacy:  I usually don’t say this to people I just met, but…I think I love you. *tacklehugs*  You totally get that there are a multitude of facets to SFR, not just the (admittedly awesome) space opera variety.  My favorite kind of sci-fi happens to be cyberpunk/futuristic, such as The Matrix, Blade Runner, Minority Report, and I’ll even lump The Terminator franchise in there as well.  It started with Mobile Suit Gundam and The Transformers when I was a kid.  Despite the fantastic concepts of lunar settlements, space-faring battle suits and sentient mechanical beings, these stories had Earth as a home base.  As a kid, that made it all the more “real” for me, and that’s why I now love to write earthbound sci-fi.

Charlee: Love you back, Stacy! I love all kinds of SFR, but I was totally a Terminator 2 girl as a kid.

Charlee:   Present company excluded, what authors are your all time and current must reads?

Charlee: Wow! some interesting and diverse choices! Books ans authors are a many splendored thing.

Anna: I am a romance writer first. For me, the world (whether contemporary, paranormal or sci-fi) needs to compliment the story not be the story.  WINTER FUSION is a romance with more than a healthy dose of sci-fi.

Sasha:   I’m with Anna here. I write in multiple genres, but they’re all love stories – always.

Stacy:   Since I love character-driven novels, I’m going to have to also tip the scales toward romance.  No matter the backdrop, my attention is won or lost on the interaction between the characters.  If there’s chemistry there, I’m in, baby!  But if not, the book/project is dropped like a hot rock.

Anna:  I like anything chocolate. I’d eat it all day long if I could. I especially love Lindt and they do make some cute tree-shaped chocolates for the holidays.

Sasha: Oh, I’m an equal opportunity candy lover. Chocolate, mints… My real weakness is gingerbread cookies, though. I start baking them Dec 1 and make batches and batches until New Years.

Stacy:   Great-Grandma Gardiner’s pecan pralines! TRUFAX: a SUPER-SEKRIT century-old praline recipe has been handed down through the women of the fam, and was originally enjoyed ONLY by the women.  At the turn of the last century, when women weren’t supposed to read the papers, talk politics or have a job/skill outside the home, Great-Grandma Gardiner would “take tea” with the women of the family.  She’d then ask the younger ladies pertinent questions about their world, and when they answered correctly they were allowed to enjoy a praline or two. Isn’t that awesome??? 😀

Charlee:   Thanks for the interview ladies! Last but not least what are you working on next?

Anna:  Ooh, I just finished a story that absolutely suits the space adventure tag! And I’m working on some paranormal short stories that continue my WindKeepers series. And the final book in my paranormal romance (with a dash of X-Men) series, The Anomaly Trilogy — SOUL STEALER — is out in February 2013.

Sasha: I’m wrapping up my third contemporary in my Red Carpet Series, my first YA, and then on to my third myth retelling in the Loves of Olympus series. Whew!

Stacy:   Thanks for asking!  *IF* the Mayans were wrong and the world doesn’t end, I’m going to have a huge 2013.  In addition to HOW THE GLITCH SAVED CHRISTMAS coming out in A GALACTIC HOLIDAY on Dec. 3, Carina Press has also accepted my PNR series, The Earth Angels.  The first book releases January 21, 2013, by the name of NOBODY’S ANGEL.  The second book, SAVAGE ANGEL, releases February 4, 2013.  The third, WOUNDED ANGEL, will release in May, and I’m currently writing the fourth and final book in the series.  *wipes brow*

Thanks for the interview, Charlee.  This was fun!

About the book: A Galactic Holiday

A detective who refuses to modify her body teams up with her cyborg rival to track down a burglar who is putting toys into homes. A solitary ice miner finds love and friendship while stranded on the surface of Galileo. And two hardheaded negotiators put their differences aside to evade an assassin and save their planets. Enjoy these visions of Christmases yet to come with three science-fiction novellas from Carina Press.  Edited by Angela James, this anthology includes:

For a chance to win some out-of-this-world swag, check out our giveaway:

Where to find more about the book and the authors:

9 thoughts on “Three for one – author interview holiday deal!”