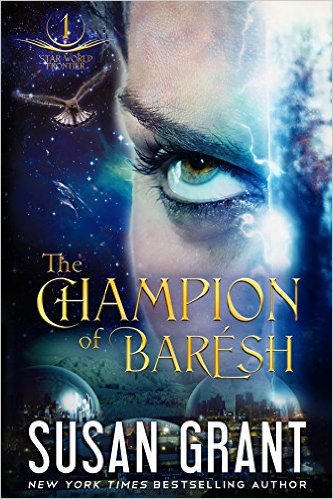 The Champion of Barésh is a story of the underdog vs. life. Jemm Aves is the underdog, living on a backwater colony planet where only the wealthy and privileged have any hope of living a comfortable life. As a transport driver for the mines during the day, she barely manages to support her family. But at night, disguised as a young man, Jemm rocks Barésh’s underworld bajha games. Using all the lessons her father taught her and her own innate talent, Jemm can’t be beat.

Why does Jemm need to disguise herself as the man Kes (short for Sea Kestrel)? A woman doesn’t play bajha because it is an ancient game, devised by the wealthy royal families as a path to a higher state of consciousness to practice their warrior skills. Women aren’t warriors.  They must be protected. Can you see where this is going?

Jemm/Kes doesn’t care about the ancient tradition. She just wants to make enough money to get her family to a better world. Enter Prince Klark – royal screw up and owner of a very successful bajha team. Looking to be even more successful, and in the process redeem himself, Klark recruits Sea Kestrel to play for Team Eireya. With Kes on the team, the championship is in sight.

The secret that Jemm/Kes harbors is going to come out. The real story of the Champion of Barésh is how the people around her handle that secret. Prince Klark has a difficult and satisfying struggle with the truth and how he feels and if he has any right to happiness with a woman like Jemm. The traditionalists struggle with the implications of how Jemm’s place on Team Eireya has far reaching effects, even beyond the elite league of bajha players.

The book blurb leaves little room for surprise as to how the story will play out.  Despite that, the characters in the story kept my attention and encouraged me to keep reading to find out how Jemm and Klark would get their happily every after.

I really liked Klark’s little sister Katijan, who questions why women can’t play bajha, presaging the personal struggle Klark is about to experience.  Early in the story Klark’s answers to his sister make it look like he has it all figured out. With both Jemm and Katijan working to undermine that elitist attitude, does Klark really even stand a chance?

Another nice moment is when the people of Earth show up on Barésh. You see, sociologically speaking, Earth is a bit more advanced than those that currently run the colony on Barésh.  In their own subtle, or not so subtle way, Earth is going to have a say in making Barésh a place where people want to live, rather than run away from.

Susan Grant’s lush descriptions of life on Barésh vs. life on Eireya are as effective at setting a scene as they are at pointing out class differences. After feeling like I was there, it is easy to venture that Eireya would be a lovely vacation destination. Barésh, not so much! Ms. Grant’s depiction of poverty vs. privilege makes The Champion of Barésh slightly more than a romance, but the social message is not too in your face.

The Champion of Barésh on Goodreads

The Champion of Barésh on Amazon US