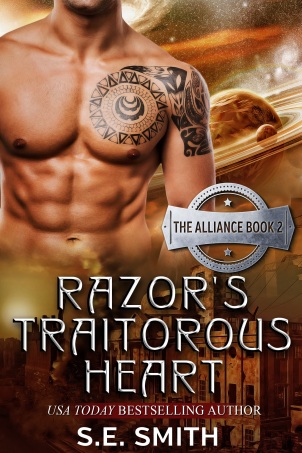 When I discovered S.E. Smith last May I fell deeply in love with the Trivator warriors of her new Alliance series.  Lucky for me Smith is kind and generous to her readers and served up book 2 in short order. Yay for me!

Now I’m going to get wordy in this post because… sometimes I do. And since you might not feel like reading a long book-worshiping narrative, I’m going to give you the scoop on Razor’s Traitorous Heart right up front. I loved this book even more that the first Alliance book. The conflict is convincing, the hero is strong, smart, swoon worthy and facing tough decisions.  The heroine is a kick-ass, smart, and determined; but not at all hard or jaded. She’s devoted to her brother and the people they are trying to protect.  Both hero and heroine are a little lonely because of their responsibilities and that made me root for them in a big way. A really good read with a villain, intrigue, action and more of the bigger world coming into view.  I eagerly await the next book!

Now the long what’s it about…

Book 2 picks up with Razor, the older brother of the hero of the first book. He didn’t make much of an appearance in Hunter’s Claim so he is still a bit of a mystery when he takes center stage. It turns out Razor is the guy the council sends out to mop things up when the people of a planet are getting out of hand. On Earth, some cities are still violently fighting one another instead of making peace. Razor is sent in to fix it. How? He’s the big-scary-bad with a well deserved reputation of flattening cities. A monster to those he goes after, but a tough-love kind of dude from the Alliance point of view. He lays down an ultimatum, stop fighting or die. Flattening a city or two usually brings the rest around on the subject of peace for the entire planet. In his mind it’s a terrible loss, but worth the price.  Chicago is next on his to do list, but Razor suspects things there have been mismanaged by the local Alliance representative.  When Razor’s shuttle is taken down on his way down to the command post in Chicago things turn deadly if not for a human woman who risks her life to rescue him. Definitely, call for a little extra time assessing the situation before destroying the city where his rescuer is fighting at the side of the leader of one of the factions fighting for control of the city.

I love the introduction of heroine, Kali Parks. We first see her climbing up to the top of a neon letter that makes up part of a mostly gone roof-top sign from before the battles began.  She’s up there because she loves the feeling of freedom that is so like flying.  It also puts her in position to see Razor’s shuttle going down. It hits a crane and ends up dangling precariously along the side of the building. Kali didn’t know who was in the shuttle so she had to help, you know, as heroic characters do.  She accomplishes some scary maneuvers to save him and steal his heart in the process.

The action part of the story is wonderfully rich with the conflict between the two fighting factions having a personal twist and the mismanagement of the Alliance representative taking a sinister turn.  Both hero and heroine are formidable warriors in their own way and the balance of lust and respect is super sexy and touching.

Can’t say enough how glad I am that I discovered this series. My happy cup runneth over!

Disclosure: I bought this book because I am totally addicted to the series.