OK so I finished up Heart of Stone and I liked it. (I guess I should have said that I don’t do reviews and this is as much as you’re going to get. Also any books I read I either own or have borrowed from someone. Which means, no one has paid me to read them or give them a good review. And, yes I own many books.) 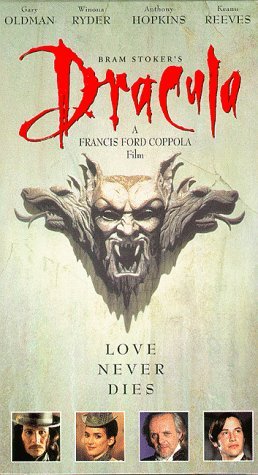 Which brings me to Bram Stokers Dracula. See on Saturday I was lazing about as all of my well made plans had been cancelled and I’d started tackling the dreaded Kitchen table when my shredder asked for mercy. So what’s a girl to do but plant her behind on her love seat and surf the channels.

Low and behold there it was the 1990’s version of Brahm Stoker’s Dracula , complete with Keanu Reeves with a British accent. Winona Ryder in her high necked, big bustled gowns. Gary Oldman as the deliciously dramatic Count Dracula and, Sir Anthony Hopkins as Van Helsing. It had been ages since I’d seen this movie and even longer since I’d seen the play.

I know this is a horror and not a romance. But now I’m driven to see just how closely the movie follows the book and whether or not it portrays Dracula’s  all-consuming twisted pursuit of Mina accurately. Because, you know I’m like that and I’m curious about Bram Stoker’s vampire and what makes him tic.  What about you is there a classic novel that you’ve been meaning to read?