If you follow the blog you see the books we are able to review, but we get way more requests than we can get to. Here is a peek at the books (all available now) that we didn’t get to review.

Let’s start with one I will eventually read. This one is by a past member  of a critique group I was a part of for several years. Having read some of his work, I know he’s a great writer and I’m sure this book will be a great read:

What if a multinational corporation had total control of its employees in space through the supply of oxygen?

The workers would receive the same harsh treatment inflicted on disadvantaged workers since ancient times. The corporation would recruit workers who use the least oxygen (small women) to be the brains controlling robots doing the heavy lifting. With no exposure to Earth’s gravity, the workers would be physically weak. They’d be crushed into blind obediency with no exit but death.

What happens when the persistent human habit of taking advantage of the weak collides with the incredibly resilient human trait of hope?

The World Below by Mike Phillips

In ancient times, magical creatures inhabited the earth. They lived on mountaintops, in trees, at the bottom of lakes and rivers. But that was long ago, before the human race declared war on the creatures they feared and hated. Now the enchanted peoples are all but gone. Those few that remain fear being stretched out on an examination table in some secret, governmental facility. The only place they can hide from the ever increasing number of satellites and smart phones is in the World Below.

Mitch Hardy is going through a hard time in his life. In his early twenties, he was working his way through college when he suffered an accident that left him flat broke and physically deformed. When Mitch decides to make a fresh start in a new town, things start looking up. He finds a place to live, a decent job, good friends. He even meets a nice girl. Unknown to Mitch, his new girlfriend is one of the Elder Race, what some call the Faerie Folk. Mitch doesn’t know that Elizabeth is looking for a father she never knew. The key to finding him is somehow tied up with the mysterious Blade of Caro. Desperate, she steals the Blade from its protector, the despotic ruler of the World Below, the Dragon of Worms, Baron Finkbeiner. When Elizabeth is kidnapped by the Baron, Mitch is pulled into a world or magic and monsters he never imagined.

In Liam’s Wake: The Makeshift Soldier by Ashlyn Forge

For eight years, Liam has been trapped underground in The Colony—a sanctuary so determined to stay hidden it forbids anyone from leaving once they’ve entered. His only hope of returning home rests on his best friend Riley who, on the eve of their escape, slipped into a coma.

Despite staggering debt, vengeful mutants and bounty hunters, Liam continues a seemingly never-ending quest for a cure to end Riley’s unnatural five-year sleep. Every night, Liam stares at the listless man who not only holds his escape, but his heart. The suffering can end, however; Liam must only forsake all hope of ever returning home again, abandon Riley to his fate, and wholeheartedly serve as a soldier for The Colony—the very people he’s trying to escape.

The Sorcery Code by Dima Zales

from the authors of the bestselling sci-fi romance series, the Krinar Chronicles, written under the pen name of Anna Zaires

Once a respected member of the Sorcerer Council and now an outcast, Blaise has spent the last year of his life working on a special magical object. The goal is to allow anyone to do magic, not just the sorcerer elite. The outcome of his quest is unlike anything he could’ve ever imagined – because, instead of an object, he creates Her.

She is Gala, and she is anything but inanimate. Born in the Spell Realm, she is beautiful and highly intelligent – and nobody knows what she’s capable of.

Augusta, a powerful sorceress, sees Blaise’s deed for the ultimate hubris that it is. She still cares for Blaise and wants to save him before he has to pay the ultimate price . . . thanks to the abomination he created.

In the near future, the Krinar rule the Earth. An advanced race from another galaxy, they are still a mystery to us – and we are completely at their mercy.

Shy and innocent, Mia Stalis is a college student in New York City who has led a very normal life. Like most people, she’s never had any interactions with the invaders – until one fateful day in the park changes everything. Having caught Korum’s eye, she must now contend with a powerful, dangerously seductive Krinar who wants to possess her and will stop at nothing to make her his own.

How far would you go to regain your freedom? How much would you sacrifice to help your people? What choice will you make when you begin to fall for your enemy? 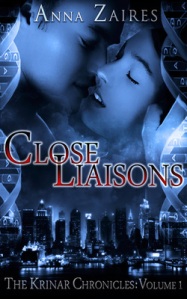 Kinara crosses into Az-kye space seeking revenge but her act of vengeance goes horribly wrong when her ship is captured. Defeated and enslaved Kinara offers herself to Aidar, the Az-kye commander, in exchange for her crew’s protection. But this warrior wants much more than just her submission, he wants her to give herself completely . . .

After the mists’ lethal apocalypse, mankind’s only hope for survival lies broken and battered, the prisoner of a ruthless sociopath who will stop at nothing to hurt him. Emma sets out to rescue him. She faces an ultimatum and must relinquish everything she holds dear. As Arthur teeters on the brink of life and death, Emma’s healing ability fails. Her own despair tests her, and she must grow stronger than she ever dreamt possible as she confronts the truth of her own heart.

In a time of apocalyptic despair, love is put to the test…

A mystical odyssey, a haunting love..

Genre: science-fiction-romance in the tradition of “Lake House” or “The Time Traveler’s Wife”

A scientist makes two stunning discoveries: First, his lost soul mate is alive in an alternate universe, and second, the Earth is doomed.

Science prodigies Lije (Elijah) Grant and Laura Bess Austin have been soul mates since they were kids. But as Laura Bess is flying off to college, the plane goes down and all aboard are lost. Lije is devastated; the love of his life is gone.

Lije grows up to become an astrophysicist, living a minimal existence, tracking boring space junk, night after tedious night at a radar station. Then one evening, he notices a satellite suddenly veering off course, disappearing into deep space.

Investigating, he discovers that it is the work of a small black hole, and it is coming closer. The Earth has maybe two weeks before Armageddon.

And that’s when Laura Bess walks up to Lije in a coffee shop and says “Hello, stranger.”

3 thoughts on “From the Inbox…”