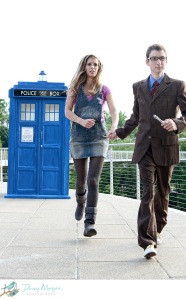 In all of time and space….where do you want to start?

SO. FREAKIN’. ROMANTIC.  This abbreviated tagline was first marketed with Matt Smith (who plays the eleventh incarnation of the doctor) and Amy Pond during a teaser trailer for the upcoming series in 2010. A teaser that I watched an insane amount of time and I even bought the poster. Doctor Who fans may argue till their blue in the face that there shouldn’t be a romantic connection between the doctor and his companions (which may have been true considering the twist with Rory, Amy, River, and the Doctor…) but I will say POPPYCOCK to you!!! For I am romance junkhead and I will continue to see romance pairings in whatever way I choose.

And I am not the only one. Many people have already used the pairing of the Doctor and his companions in their romantic endeavors.  Especially during weddings. 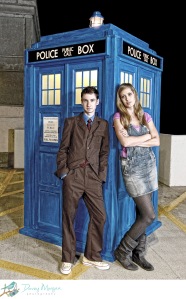 Davey Morgan was kind enough to send our lovely blog the photos he took of a doctor who themed engagement photo. You can see all the awesome photos on his blog. The photos are absolutely spectacular and I am completely jealous. The groom did a smash up job dressed as the doctor and the bride was so cute in her jumper! They were so into the poses that the photos really look like promo pictures for BBC.  The coolest part of it all is the HAND CRAFTED TARDIS. That is a true blue (hee hee ) handcrafted replica of the TARDIS made by the bride’s father! Oh I cannot even put into the words the waves of jealously rolling through my veins. Bravo! Bravo! These are definitely engagement photos to be cherished a life time.

I am surrounded by friends getting married or just got married. I will not be remiss if I say that I have been bitten by the wedding bug and have had feverish day dreams of what my future wedding ( in 10 years) shall be like.

As I sweat and daydream in my stuffy apartment, let me share my romantic story with you.

A long time ago (2009), I woke late on the morning that I was to drive to San Diego Comic Con. It’s a three hour drive from LA (the way I drive) and I had to be there by nine am. I woke up at 6 am. I frantically made it with twenty minutes to spare somehow, secured decent parking, and checked in. My shift wasn’t until the afternoon so I was able to wait in line to see DAVID TENNANT.

YES. I KNOW. The panel was AWESOME.

I waited in line behind the hundreds of people. I chatted with a couple of people around me until my eyes noticed a guy in the corridor holding a cardboard sign that read “TWILIGHT RUINED COMIC CON”( This was also the year that the Twilight franchise held panels at Hall H, therefore plugging up all the seats with the Twihards that refused to leave the Hall until the panel started).

“What’s up with Twilight?” a deep voice asked behind me.

“Wellll….” I started as I whipped around and stuttered at the tall,muscled man dressed in a black shirt, pants, bandana, and dark sunglasses.

After the panel, we hung out, I gave him my info, and we went our separate ways. Three days he messaged me, we met again for coffee and we have been together since.

I love telling this story. It is such a geektastic story. And that is why I am truly jealous of anyone who is having a Doctor Who themed wedding. I cannot wait until I get my chance!! Oh the ideas I have…here’s a sampling:

* cupcakes with all our favorite monsters

Oh man, I am going into wedding overload right now.For you lucky ladies planning on your own doctor who wedding, check out Mr. Morgans photography for ideas or even have him do your photography. I also love checking out Offbeat Brides for more inspiration.

And if you’re not attached it, don’t worry. Just follow your passions. Enjoy yourself.

Disclaimer: Photo access was given by Davey Morgan. Featured picture is a property of BBC.

4 thoughts on “A Whovian Wedding”