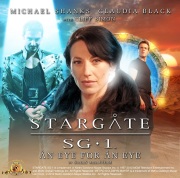 Blurb:
A visit from Vala’s ‘friend’ Keto results in the Sun Tzu, Daniel and Vala being sent to investigate a rapidly disintegrating ship. Once there, they discover evidence of Baal’s experiments – but they’re not prepared for what else he’s left behind. It’s a case of nature or nurture – but will Daniel and Vala make a decision that will save the Sun Tzu or condemn all on board to death?

Review:
Following on from Half Life [reviewed here] An Eye for an Eye by Sally Malcolm is the next instalment of Big Finish’s Stargate SG-1 Series 3.

Vala and Daniel have uncovered Baal’s plot to replace members of the SGC with implanted clones, though they’ve not managed to catch up with the troublesome Goa’uld as yet. Determined to do that, and put a stop to his plans, they take the Asgard ship Sun Tzu on an ill-advised mission to recover alien technology.

However, tech isn’t all they find. There’s considerable evidence of the extend of Baal’s cloning, including one of his own…

There is a slight error in canon in regards to the clone, but Malcolm has written such a damn good story that I can ignore it and just bask in the wonderfulness of this episode. The Goa’uld get a rough deal from SG-1’s writers as a whole, so it was nice to have someone write one that is so much more than Token Bad Guy. And then to hand that more developed character over to Cliff Simon…

I can’t not geek out over his performance in this episode. It’s beyond fabulous. The clone Vala and Daniel stumble upon is unblended (meaning he’s no symbiote), but he does have inherited memories. This includes his original name – Aziru – and several lifetimes of traumatic events that leave the poor guy mentally scarred. And Cliff plays this troubled, vulnerable man to heart-rending precision. You can’t not care.

And then you wish that you didn’t…

This episode deals with the hard questions of dealing with a parasitic enemy that uses humans in such a manner. Whereas the television show tended to whitewash or brush concerns aside, Malcolm met them head on and this audio will make you question what’s right and what’s wrong in a way I could only wish the show had dared to. It takes something that is presented on screen as black-and-white and blurs the lines to shades of grey, and it’s wonderfully, painfully, brilliant.

In short, An Eye for an Eye was everything that Half Life wasn’t, and I was thankful I’d given it a try. Ugly sobbing notwithstanding.

3 thoughts on “Review: An Eye For An Eye by Big Finish Audio”