A while back, Heather at The Galaxy Express brought my attention to a great article about SciFi Romance by Chris Gerwel at Amazing Stories Magazine.  For those of us who love SciFi Romance and simply can’t understand why EVERYONE isn’t onboard, it provided some well thought out ideas.

Are Readers Ready?
A large part of Chris’s explanation for why SciFi romance is less popular than paranormal romance boils down to the fact that readers aren’t ready for it. By that Chris means that the common elements in SciFi—such as aliens, spaceships, and phaser pistols—have not been a part of popular culture as long as the paranormal counterparts—vampire, werewolves, and witches. As a result readers aren’t as comfortable with them.

I see the argument and I’m sure it has merit. And sure vampires have been around for hundreds of years, but I grew up with Star Trek, Mr. Spock, and phasers and I think that probably means most of the reading public did too. I do remember a time before Star Wars, but I also remember a time before vampires were hero material. Mr. Spock has always been hero material. I’m not sure the fact that my great-grandmother had heard of vampires has much effect on my current reading.

What exactly does appeal to romance readers? 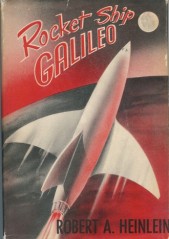 If you look strictly at modern popular culture since, say 1900, science fiction elements were alive and well and part of popular media in a much more positive way than the paranormal elements, which were mostly relegated to horror for most of that time. If you look at it on a surface level you might think the positive spin found in SciFi favorites like Lost in Space, My Favorite Martian, Star Trek, and Battle Star Galactica (1978 version) would have a much stronger appeal to romance readers who like happily ever afters.

The one very big flaw in that argument might be that all of my examples are visual media. To give Chris credit where it is due, the article does point out that SciFi media (Chris’s examples were all visual media aswell) is popular, but not speaking to romance readers. Chris asserts that is because there is little romance in SciFi media and I am not sure I agree with that, but I’ll get to what I think is the real problem shortly.  First and obvious factor might be that there is a difference between visual media and books. The SciFi books of the era were targeted very heavily toward boys and men. There is a long tradition or at least a perception that SciFi books are female-unfriendly.

Who is doing it successfully and how are they doing it?
Still, that is all looking at the surface trappings of SciFi and paranormal romance. I think Chris strikes on a much more important factor in the part of the article that discuss the story focus found in the very popular quasi-scfi romance of Nalini Singh’s Psy-Changeling series, and other popular SciFi romances, that is also common in paranormal romance. Chris states that they “focus on the power dynamics between emotions and actions among individuals and social groups” and I’d agree that these types of stories go over with romance readers much better than stories that focus on the implications of the application of technology for society or on the ethical and moral dilemmas that arise(common SciFi themes).

The crazy thing is that I think SciFi romance writers already know this on an instinctual level and many of them are already going in that direction. So, all this analysis brings us back to the beginning question (why is the SciFi romance market small) with very little new knowledge that is constructive for  those writing and reading in the genre.

It will be popular when it becomes popular.
Whether you believe SciFi romance is currently underperforming in the market because the language of SciFi is too much of a stretch for romance readers or if you think women are still put off by the idea that SciFi novels are for men or if you believe romance readers might still have a false expectation that SciFi romance will focus on the science and technology over relationships, it probably all comes down to this…a sub genre becomes popular when a sufficient volume of quality media (TV, movies, books) make it into the public awareness and gain popularity across a broad spectrum of the mass audience. If you are thinking, didn’t she just say it will be popular when it becomes popular, then you got it exactly. LOL. How that happens is a bit of a mystery. My personal take is that this sort of things slowly snowballs in the shared public awareness until you have one or two breakout novels, followed by a wave of good quality novels in the same vein, and then you get an uptick in related genre media followed by another breakout and so forth. In a sense the subgenre feeds into the next generation of its growth. My hope is that we are on the tipping point were a few breakout novels could set the snowball rolling, but you never really know anything for sure until the snowball has rolled right over you and splattered out into a lovely, snowy blanket all around.

In the mean time all we can do is consume what we can find of the stuff and for those of us that produce it, work on producing the stories that focus on emotion, relationships, and social struggle without giving up the other elements of adventure and cool new ways of doing things that we love.

That’s my take, but what do YOU think?

35 thoughts on “Is SciFi Romance at the Tipping Point?”