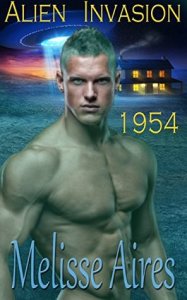 Alien’s have attacked Earth. It is 1954 and Earth is not prepared to defend itself. Survivors are few and far between and in hiding. Debbie Sue and her nephew Bobby are among the remaining humans. They are out scrounging for supplies when they are captured by one of the aliens along with a dog that must have been scrounging also. Akarak is quite adamant that he doesn’t want to harm Debbie Sue or Bobby. “No harm. Harm bad.” Quite the opposite, he wants to help. And by the way, if a Human also wishes to help him……well, sex would be much appreciated.

Alien Invasion, 1954 does not have a complex plot. There is no intrigue and no mystery. There are no deep characters. Debbie Sue and Akarak are as straightforward characters as you will ever read about. There is no moral commentary. Strike that. There is that thing about helping others.

What Alien Invasion, 1954 does have is a plot right out of a 1950’s B-move. Which is exactly what the author intended it to be and is one of the reasons I like it!

There are good aliens and bad aliens. Aliens and Earthlings. Females and males. Romance. Alien Invasion, 1954 is a light, quick read. Only about 60 pages. Despite the short length, there is a complete story to be enjoyed. And it takes place in the 1950’s which is kind of fun. I had to keep reminding myself of the year every time Debbie used technology in a world with out electricity. Remember manual typewriters and mimeograph machines?

Ultimately, this story is a positive take on the invasion of Earth by aliens.  As SFR readers, I think most of us want to get along with the aliens when they reach Earth.  Aliens helping Humans makes  Alien Invasion, 1954 a sweet story.  Note that when I say ‘sweet’ I am talking about the story line.  Not sexual content.

Yes there is sex.  Well, it is important to keep the hero healthy isn’t it?  And to bring the heroine and hero closer together.  And yes, there are tentacles, which I thought could be creepy.  But it wasn’t.  I don’t remember sex in any B-movies I ever watched, but books are always better than movies – aren’t they!

Need a quick read for a cold evening this winter? I recommend Alien Invasion, 1954. By the way, there are dogs. Which always makes me smile.

I was please to receive a review copy of this book from the author.

Have you read Ms. Aires’ Diaspora Worlds series?  Book 1, Her Cyborg Awakes, is free, or you can get the whole bundle for one great price.