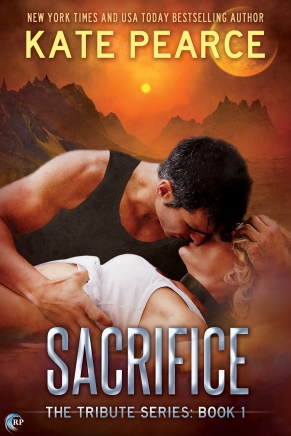 Awaiting execution on a foreign planet, Anna Lee has nothing left to lose—until Commander Rehz Akran offers her a chance to escape her fate. Anything is better than death, but when her training for Akran’s mysterious mission begins, the brutality is hard to take . . . especially since Anna has no idea what the workouts, beatings, and endless sexual demands are preparing her for.

Rehz Akran doesn’t deal with failure. He’s determined that his last trainee will survive her immersion in an unimaginably alien world and return alive—even if it means she’ll hate him forever. He needs to stay detached, but his new recruit makes that impossible. Soon he’s willing to defy his own training for a chance to forge a true connection with Anna.

It’s Rehz’s job to teach Anna to survive as a Tribute. And if she does, it’s his task to help her overcome the trauma of the experience. But this time he isn’t doing it to save his planet. This time he’s doing it for love.

New York Times and USA Today bestselling author Kate Pearce was born into a large family of girls in England, and spent much of her childhood living very happily in a dream world. Despite being told that she really needed to “get with the program,” she graduated from the University College of Wales with an honors degree in history. A move to the USA finally allowed her to fulfill her dreams and sit down and write her first romance novel. Along with being a voracious reader, Kate loves walking on the beach and climbing live volcanoes in her new home in Hawaii.

Kate is a member of RWA and is published by Kensington Aphrodisia, Cleis Press, Carina Press, and Virgin Black Lace/Cheek.

Every comment on this blog tour enters you in a drawing for a $100 Amazon giftcard! Entries close at midnight, Eastern time, on September 12. Contest is NOT restricted to U.S. entries. Don’t forget your email so we can contact you if you win!