We are very excited today to be participating in Angela Quarles’ Cover Reveal for her upcoming release STEAM ME UP, RAWLEY.  To celebrate, Angela is giving away an ebook copy of MUST LOVE BREECHES, a time travel romance.

To enter the contest, simply comment on this post. Let us know what you think of the SMUR cover!

While Steam is Book One of its series, it’s a spin-off  series, as the events that happen in Breeches creates the steampunk alternative world that Steam takes place in. See the book and contest details at the end of the post.

Steam Me Up, Rawley is a full length New Adult Steampunk Romance that will be released as an e-book in Jan/Feb 2015. 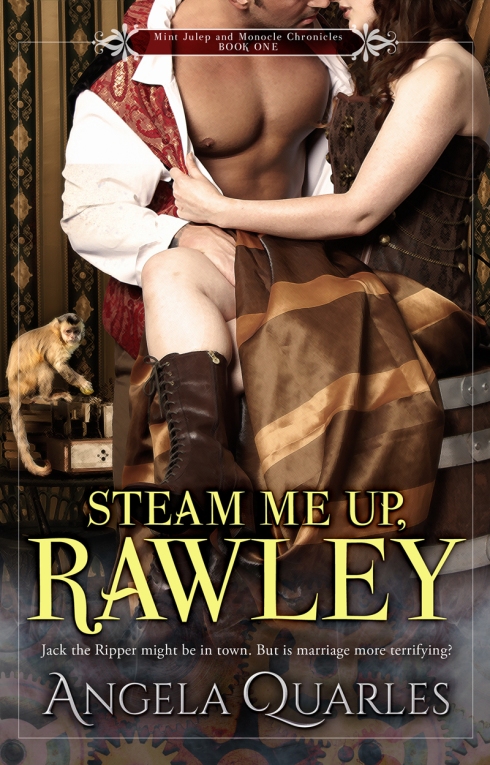 Jack the Ripper might be in town. But is marriage more terrifying?

In an alternate Deep South in 1890, society reporter Adele de la Pointe wants to make her own way in the world, despite her family’s pressure to become a society wife. Hoping to ruin herself as a matrimonial prospect, she seizes the opportunity to cover the recent Jack the Ripper-style murders for the newspaper, but her father’s dashing new intern suggests a more terrifying headline—marriage.

Dr. Phillip Rawley’s most daring exploit has been arriving at his new home in America in a hot air balloon. A tolerable sacrifice, if it means he can secure the hand of his new employer’s daughter in a marriage of convenience. But Adele works, she’s spirited, and she has an armored pet monkey running her errands. Not only does she not match his notions of a proper lady, she stirs up feelings he’d rather keep in tight control.
With Adele hunting down a headline and Dr. Rawley trying to protect and pursue her, a serial killer is spreading panic throughout Mobile, Alabama. Can Adele and Rawley find the murderer, face their fears, and discover true love?

Goodreads   |   Steam Me Up, Rawley board on Pinterest   |   Official Book Page

Angela Quarles is a geek girl romance writer whose works includes Must Love Breeches, a time travel romance, and Beer & Groping in Las Vegas, a geek romantic comedy in novelette form. She has a B.A. in Anthropology and International Studies with a minor in German from Emory University, and a Masters in Heritage Preservation from Georgia State University. She currently resides in a historic house in the beautiful and quirky town of Mobile, AL.

Contest Rules: Open to US and International. Ebook format will be a choice between Kindle, ePub, or PDF. To enter, comment on this post by Nov 22, 2014.

About Must Love Breeches: A quirky, modern American girl working at the British Museum has finally met the man of her dreams. There’s one problem: he lives in another century. When a mysterious artifact strands her in pre-Victorian London, she must find a way home while navigating the pitfalls of London society, resisting her growing attraction for the hunky lord so hot he curls her toes, and ultimately having to decide when her true home lies.

3 thoughts on “Cover Reveal: STEAM ME UP, RAWLEY by Angela Quarles”