With all of time at risk, it’s a bad time to fall in love…unless it’s the only time…Robert Clementyne is going on a transmogrification machine hunt. He fears finding the machine will be as difficult as pronouncing the name. How can the steam-powered device perform as advertised, and how useful can any information be, coming from a steampunk themed bowling alley/museum? It’s pretty crazy, but he’s been there, done that, and thinks he can handle it. And then he meets the proprietor/curator…Emily Babcock. Emily grew up in crazy, still lives in it-hey, it’s her freaking zip code. So no worries when Robert and his team walk into her bowling alley. The first visitors ever to her museum. But neither of them is prepared for what happens when they open the door to the past…and the future. With a side trip through Roswell…and a face-to-face meeting with an evil genius/wannabe-who is on his way to becoming evil overlord-of-everything…

I mean really. With a book blurb like that, what’s not to like – right? If you decide to dive into the imaginative, amazing world(s) of Pauline Baird Jones’ Steamrolled, be prepared for anything.

There is a steam-powered transmogrification machine that time travels. It was built and used (Tangled in Time) in the late 1800’s by Emily Babcock’s ancestor, stored in a museum, and still works more than 100 years later.  Step inside at your own risk.

There is a time tracker Ashe, who seems to be some kind of time savant and just knows when things are going to hell. Her story interweaves with that of the main characters Emily and Robert, filling in some of the critical gaps that Emily and Robert don’t uncover in their part of the story. If I am honest, the back and forth between settings did spin my head a bit. Or maybe it was all the talk of time travel tech, time disturbances and time paradoxes. But Ashe’s character, who seemed to be right in the middle of the time disturbances, was the equalizer, explaining what the heck was going on so a time travel beginner like me could follow along.

There are bad guys. Evil geniuses. Henchmen. Automatons. Zombies. Lots of opportunities for the good guys’ and gals’ days to get totally messed up. Tobias Smith is a recurring character from previous books in the Project Enterprise series. His character really takes shape in Steamrolled. You might even start to like him, even if you don’t like what he does. Maybe.

Speaking of characters from previous stories, there are a few others. Delilah, her mate Helfron Giddioni, Colonel Carey, Fynn. They are all there in their small but important rolls. If you have read books 1-3 of Project Enterprise, they will be like old friends.

There are nanites. Lurch, Wynken, Blyken and Nod. Intelligent nanites that communicate with and help their hosts. As well as add a certain amount of humor. These nanites have surprisingly good senses of humor on their own. But also, they are machines and it is sometimes fun to see them learn new human stuff. Like falling in love….

Did I say falling in love? That brings me to my absolute favorites – main characters Emily Babcock and Robert Clementyne.

Emily Babcock – she who does not ever ask a question, who thinks Robert Oh My Darling Clementyne is a little dangerous and a lot geeky. She’s a geek too. “I like steam….I like engines, too…. And I might be a bit fond of steampunk, too.” Emily is delightful, quirky, smart, industrious and very good with a wrench.

Robert Clementyne – or ‘Professor’ because he’s so smart. And wanted to kiss Emily almost as soon as he saw her. Super intelligent and unceasingly curious, Robert and his nanites are like a superhero geek team when it comes to getting out of tight places.

My copy is a paperback. I love this cover!

This is probably the cutest couple in all of steampunk fictiondom. There is some intense admiration at first sight. I hesitate to use the L word there because both of these characters are, at the very least, intelligent, practical characters that would most likely eschew the very idea of love at first site. But admiration! And Oh my darling Clementyne! Robert’s nanites, Wynken, Blynken and Nod (who sometimes jump bodies when there is a kiss – see – Robert does get that kiss he wants 🙂 ), eat up everything about the courtship between Robert and Emily and may even be said to play matchmakers.  Here is a bit of that admiration at first site/nanite encouragement from Robert’s point of view:

“All this ran through his brain alongside a mental path that was less clear, but more intense. This track noticed things like how smooth her skin looked in close proximity. This track noticed her red, red mouth and was fascinated by it. It looked soft. It looked kissable. He’d never thought about a girl this much before. He wished he could kiss her. He’d never kissed a girl. Shouldn’t want to change that now. He had a mission, the Delilah-infused part of him reminded with a mental tap of a foot. The nanites wanted the kiss. They liked new experiences. He felt inclined to go with the nanites. Maybe he liked new experiences more than he realized he did. Or maybe there was a small part of him that was a guy. Out of the range of scents hanging heavy in the air, he picked out one that must come from her, because it made the hairs on the back of his neck rise. All of his education and IQ couldn’t give him the words to describe the sensation. It was.”

My favorite thing about any book by Pauline Baird Jones is the humor. I feel like she writes directly to that portion of my brain that likes to smirk, smile and laugh out loud. Steamrolled seems especially tailored to my sense of humor.

The truth is, Ms. Jones knows her characters inside and out. What makes them happy, scared, sad, intrigued.  How their minds work.  Even what they find amusing.  By knowing them so well, she knows what is humorous about them and it just flows out in the writing. Trust me. Steamrolled will put a grin on your face many times over.

Steamrolled is book 4 in the Project Enterprise series. You can read it as a standalone. I love the whole series though, so I recommend reading them all. The series is also tied to the future scifi series An Uneasy Future and to her novella Nebula Nine, all of which include the trademark Pauline Baird Jones sense of humor and a fascinating, sometimes time-traveling universe peopled with being of many skin colors (including purple), some of which are hosts to nanite sidekicks. Steamrolled is time travel, steampunk, and scifi all in one quirky, fantastic tale of adventure and romance and saving the universe from disaster. Highly recommended!

If you want to try Steamrolled, it has been serialized with the first part available for free.  Or you can dive into the entire 47o page book.  (Go for the whole book!) 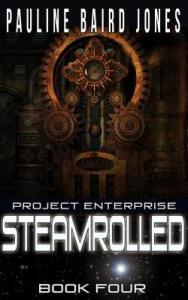