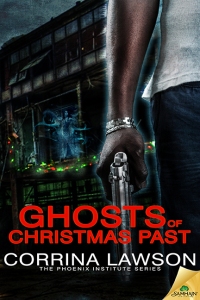 GHOSTS OF CHRISTMAS PAST by Corrina Lawson

Book Blurb: Christmas can be murder on a relationship that’s on the rocks.

As Christmas approaches in crumbling Charlton City, Detective Aloysius James and his partner, Noir, are at a crossroads. Figuring out how to reconcile their careers with their relationship is harder than catching the bad guys.

Now that Noir has learned to control her invisibility and is making a name for herself among the city’s artist collective, Al senses there’s something she’s keeping from him. And he doesn’t know how long they can remain partners. Or even lovers.

Noir isn’t sure how Al would take it if he knew how deeply he has touched her artistic soul, or how he could react if he saw the secret drawings that have helped heal the wounds of her past.

When a murder lands them on opposite sides—Al ready to arrest a suspect Noir insists is innocent—they’re going to need to unwrap all the ghosts of their pasts to make this Christmas the first of many. Or it could be their last.

Here’s what I thought:

Ghosts of Christmas Past might be more Urban Fantasy than paranormal romance. The hero and heroine, a multi-cultural couple, are already together when the story opens. I found growth in their relationship lacking as the story progressed. I also didn’t find significant emotional levity that is hallmark in romance.

The “paranormal” element is that Noir aka Lucy, can turn herself invisible. The dual names for Noir aka Lucy threw me. When comic book and graphic novel characters have dual identities, there is a clear delineation to the reader which one is on scene. Those characters are oftentimes different sides to the same coin. The way Noir aka Lucy’s character is presented seemed a bit waffled to me. It was hard to get a good grasp of her as a whole. As a result, I felt disconnected from her character at times. That’s not to say that I didn’t like her, because I did–especially when she was Noir.

The hero also has two names, Al and Captain Fix-It. This was less of a problem for me because his “identities” were more internally and externally consistent.

I was disappointed that there were hints at some prior involvement with the Phoenix Institute, but this was never fully explained. So, for me, it felt like the mention of the Institute characters were a way to connect this particular story to the series, but Ghost of Christmas Past doesn’t have the same “feel” to me as others.

All in all, Ghosts of Christmas Past is a blended mystery that is satisfactorily solved. The writing is clean and crisp, and the hero and heroine are still together in the end, which for me…is a happy ending. I really like those.

Author Scoop: For more information on the author, visit  http://corrina-lawson.com/

This book was provided by the author for an honest review. No other compensation was offered or received.