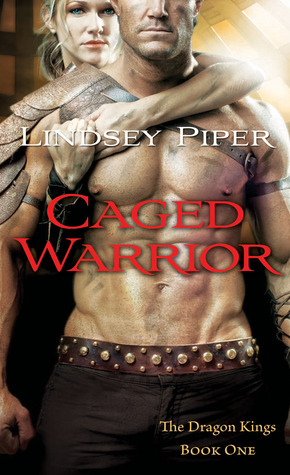 As hard as was needful.

In Caged Warrior by Lindsey Piper, Nynn is one of the powerful race called Dragon Kings, but she doesn’t remember ever having use of her powers. Sent to live among humans, she gave up her ancestry, took a new name and married a human. That might have been the end of her story if she hadn’t also had a child—the first natural born Dragon King in a generation. Five years later, men come in the night to kill her husband and steel Nynn and her child. After surviving together in the labs of the Aster family and surviving unspeakable degradation, Nynn is ripped away from her son and sent to the Cages to fight for her right to win her son back.

Leto was born to be a Cage Warrior. Since natural procreation has become out of reach, many Dragon Kings rely on the medical aid of the Aster family to continue their family lines. But the Aster’s aid doesn’t come without a price. Leto’s father was a Cage Warrior for the Asters, living and fighting in hidden underground world of the Cages and ultimately winning the chance to father three children. At 16 Leto took his place in the Cages, fighting to earn the right for his sisters to bear children. That life is the only life he’s known and he has survived, thrived, and become an unbeatable champion.

Too bad, unbeatable isn’t entertaining or profitable for the Asters.  To make winning more of a challenge, he’s paired with Nynn and must trainer her to survive and fight.  From the beginning Nynn has an inner strength and determination that earns Leto’s respect, but he doesn’t dare show her that respect or any kindness. She must become rugged, tough, and unbreakable if she is to survive.

Rough handling – The case for hero point of view.
In the early part of Caged Warrior, Leto’s treatment of Nynn is harsh and could have easily turned the reader against him, but the author does a masterful job of letting us into Leto’s mind. I’ve read too many books lately where the hero’s mind is left as a mystery and I often feel a little cheated. Even if we don’t agree with Leto’s methods, here we can at least understand them, know the motivation behind them,  and more importantly know how they also affect him.

Nynn is easy to admire. We learn what she’s already been through as we see what she’s going through now. It might be easy to pity her if she pitied herself. But Nynn isn’t interested in pity. She grieves the loss of her husband and even the loss of herself—the woman she was—but she stays focused on what’s important and that’s rescuing her son.

Same path different goals.
Nynn and Leto have a common goal in the short-term, surviving and winning their first match, but their long-term goals start out very different. Nynn has no intention of waiting to earn her son’s freedom. She has no reason to think the Aster’s will keep their promises. Leto has been taught his whole life that his path, serving the Asters, is the honorable thing.  He is determined to make a success of his new partner. He can only ensure his sisters’ futures by winning with Nynn at his side, so he is determined to keep her there.

The world of the Dragon Kings is not so very different from other paranormal worlds, but the characters leap off the page and the underground world of the Cages is complex and textured. It’s peopled by interesting characters from other clever warriors to sadistic nut-cases. The world centers around the cage in which the warriors fight, but in reality their whole world is layered with cages from the collars that dampen their Dragon King abilities to the cages they build in their own minds with tradition and unwarranted trust. It is fascinating to watch Leto as he begins to see his world through Nynn’s eyes and begins to realize he is no less a slave than Nynn.  A hard truth for a proud warrior.

Nynn also must struggle with reclaiming her natural abilities and learning to control them. Not an unfamiliar struggle in paranormal romance. It does slow down her training and leads to some complications, but it is not something the book dwells too long on. There are plenty of other fresher twists to keep the reader turning pages.

Romance so well done there is little to say.
On the topic of the physicality of Nynn and Leto’s relationship, I can say that this is a sexy book, but not a sex filled one. The author manages to make you feel the powerful desire Nynn and Leto have to reach out and touch each other. I have a perfect image of sculpted muscle and the marks of being a warrior that will stay with me for a while. The love scenes come late in the book. They are both sexy and romantic and well done.

To sum up my response to this book, definitely a keeper–Caged Warrior is full of emotional intensity and chemistry that crackles and sparks from page one.

I do have one minor grievance with this book and the world. “Dragon Kings” is an odd name for a race. King doesn’t refer to a monarchy. They are all Dragon Kings.  It just feels awkward to me.  Since the book is amazing in all other ways, I guess I can live with it. LOL. I should probably also mention that these people aren’t shape shifters. They worship “the dragon” and believe it is the source of their abilities.

This is the first book in the series. The second book Blood Warrior and a prequel novella are available now. The bad news is that the third book isn’t scheduled for release until next year.  There’s no cliff hanger ending to Caged Warrior so as long as Blood Warrior has a similarly self contained ending there is no foul to call, just the frustration of wanting to play in this world and having to wait.

This book was given to me at a free book signing sponsored by the publisher.

2 thoughts on “How hard would you fight to save your child?”