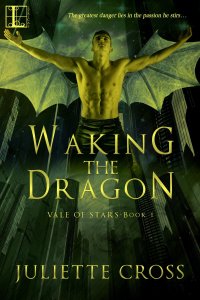 It has been a very long time since I’ve read a paranormal romance that I relished as much as Waking the Dragon by Juliette Cross. I read this first book of a new series in three sittings and each time I closed the book ‘WOW’ went through my mind. Along with ‘Oh my!’ and then another ‘WOW’.

Human-dragon hybrids, dark rituals, power struggles, magic and scorching romance combine to bring this novel to heart-racing, captivating, glorious life! Too many adjectives? Too bad. I’m not done yet.

In paranormal fiction, there are dragon shifters – yep, I read lots of those stories. I like dragons. They are mysterious and beautiful and magical. But this is my first human-dragon hybrid story. Otherwise known as Morgans, they are awesome! All the accessible aspects of humanity combined with the beastly benefits of dragonhood. Then there is that ability to fly. I’d like to leave my car in the garage and fly from place to place. Of course I’d need a landing pad on my roof. Better yet, I could be harnessed to a big gorgeous Morgan with his strong arms around me. Nope, nothing beats flying! Now you know one of the things I like about Waking the Dragon. As paranormal beings go, Morgans are now on the top of my list.

I believe I mentioned dark rituals. That result in dead women. Human women. It appears Morgans are doing the killing. In a world where Morgans and humans apparently live in harmony, this is a really huge deal. When college newspaper reporter Moira Cade gets hold of this story, she is determined to solve the mystery and break a story that is big enough to make her career. The atmosphere surrounding the abduction of the women is brutal, very dark, and sinister. Even the bold and gutsy Moira decides to get help. She just happens to have in-laws in the Morgan security business, Nightwing Security.

Moira gets paired with Kol Moonring. Protective, and dominant, Kol experiences constant resistance from the headstrong, independent Moira. But the more they work together, the more they are unable to resist each other. The intense, heated passion between Moira and Kol is another of my favorite things in Waking the Dragon.

There is a little magic in this story too. It is understated, but important.  In this book, I like that intelligence plays a bigger role than magic. Magic can be potent, but the mind is far more formidable.  Still, a little magic is appreciated and it has its place.

Dragon, Morgan and human lore are part of the story.  The tales of the history of Morgankind are fascinating.  The fact that they are intertwined with the present-day happenings in Gladium make them even more compelling.

I am so intrigued with this story. The are two parts. One is the immediate case of the murders in the Gladium province. The investigative efforts of Moira and Kol will uncover some key players and resolve a part of the mystery. But what they find will only lead to more questions. There is a critical part of the story that has not been told yet. The big WHY? still needs to be answered. In Waking the Dragon, Ms. Cross has given us enough story to satisfy that don’t-leave-me-hanging-I-detest-cliffhangers part of my brain. But in a very well told tale, she also left enough questions to make me want to follow this story, most likely to the end of the series! So, Ms. Cross, please don’t draw this out too long. I want to read the next book in the Vale of Stars now!