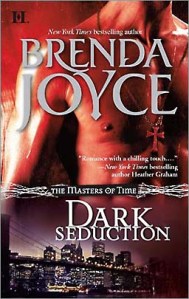 Dark Seduction by Brenda Joyce is a time travel romance with a sexy, Scottish medieval Master of Time who comes forward to help save the world from a string of sexual murders plaguing modern day, simultaneously disrupting the life of Claire, a rare bookstore owner with mommy issues and kick-boxing training.

Now that sounds like it might be worth a few hours and a bottle a wine, huh?

Joyce is very skilled and talented writer and I was immediately grounded in the Middle Ages. The premise, plot and supporting characters were all wonderful. The dialog was fresh, appropriate to the characterization. And frankly, there were little snippets of dialog that made me smile. Simply because I heart quirky side characters. And Joyce does an amazing job of sketching unique characters—even the side ones.

Speaking of characters, the heroine and the hero were both well-developed and well-drawn. The hero especially was particularly likable. Malcolm is the right blend of alpha. Strong. Mostly silent. Devilish. Anger problems. My fav.

That being said, I had a real problem with certain aspects of the story. Mainly, the heroine. First, what librarian puts on a mini-skirt to handle the aftermath of a home-invasion?

Second, there is a brand of TSL that exists in PNR/SFR I can’t stand. This heroine was a “breed” of that heroine. I couldn’t connect with her because even when it was clear she was causing more stress (and problems) for the hero by insisting to join battles she had NO QUALIFICATIONS to participate in, she did so anyways.

Like you know when a meteor (or some similar form of “Wow! That’s bad!” or “Oh god, oh god—we’re all gonna die!”) is coming toward earth and the hero has the power to save mankind if he’s just given ten minutes of uninterrupted quiet, but alas! Here comes the heroine to “help” even though he’s told her, “Hey, I need like 10 minutes of quiet time. No really, let’s play the giraffe game. Oh, and I need to know you’re safe. Aside from that, I got this. Really.” And not only does she ignore his plea, but derails the plan AND gets herself captured. And instantly there’s noise everywhere. And every woman on the planet reading the book face-palms and goes: “Yes, while you (the heroine) do have some (very limited) martial arts skills–these are warriors swinging around twenty-pound swords like toothpicks. Make like Baby and sit your ass in a corner, would you?”

Oh, but the villain—I heart the villain. He is decently strong and was really nicely illustrated as an Unlawful but Methodical evil. Plus, he is strong enough to carry this series as an antagonist.  He actually had brains and brawn enough to almost defeat the hero—which, I’m not going to get into how his master plan is foiled because this is a romance so I understand that while the villain is necessary to the plot…blah, blah, WHOMP, WHOMP—it really just isn’t the true focus of the story.

That being said, I do hope the next book has a more robust struggle/climax between hero and villain. I mean, this was almost classic: “And then, the villain randomly decided to pick up a skull and wax on, and on about his diabolical plans in some ungodly uninterrupted stream of florid prose…and then, the hero won. Of course.”

For some reason, a lot of readers have complained about the sex (via Goodreads, etc.) Frankly, I liked it. Yes, it is a little tedious to read about “wetness dripping down her inner thighs” so often (not sure if I’ve actually experience that, but whatev). However, the sex was unique and appropriate to the characters as they had been developed.

That being said, a fair warning: the sex is frequent and graphic and might not be everyone’s forte.

First off, lovely job on the time-travel. It is a rare author indeed who can write time travel clearly and consistently. I have the ADD from hell and even I knew exactly what was going on every step of the way. I site the author’s mastery of the writing craft for that.

There was also some really interesting things done with the mythology framing the story. MMC is a Master of Time, with the ability to…well, time travel. Here’s the thing though, he also has incubus-like powers. (Remember! This is a romance.) He can borrow energy from his sexual partners, and there’s this whole bit about the taboo of taking too much. (Yep, you heard it here first–death by life-energy sucking penis! lol)

The Rose women (FMC) are witches, but their powers vary. In this book, the heroine’s paranormal ability was limited to just visions/dreams. I’m interested to see some of the other Rose women come into their power.

The only style problem (for some readers) I will mention is the author’s use of Scottish dialect. It will take some getting used to. Really. There was a moment there where I almost gave up because….well, picture this: 3am on a Monday morning. Scalding bathwater. And the headache from hell. No one has time to guess what my sexy hero is trying to say.

Dawn is fast approaching and with it the terrible precious pitter-patter of little feet.

However, if you can grin and bear through the first few chapters and give your brain time to get accustomed to the strange rhythm—you will catch on. By breakfast, I was throwing around “ken” like I knew what it meant. Plus, use of the dialect really did help with realism.

It was a nice, light read. It certainly had its flaws, but by the end I was happy I had read it. The romance didn’t take a back seat to the racing plot and I was able to believe that it was a once in a lifetime love for both characters.

Plus, this is the first book in a series. (Brenda Joyce’s Masters of Time) And the next book is setup masterfully. So much so, I will have to read it.  I would recommend this book to anyone who hearts old-school PNR/Time-travel, but wants to see a heroine that has a (teensy) bit more back bone. Plus, Scots just…stay smexy. Forever.

Blush Quotient: Red—a little too red (for some) if ya catch my drift.

Find out more info about the author and series here: Author Website

(Disclaimer: This book was purchased by the reviewer. She has elected to offer an honest review.)