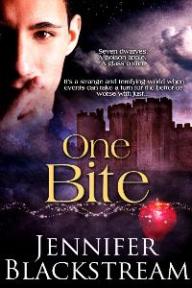 As an introduction to the characters of these books, Smart Girls Read Sci Fi is pleased to offer a little off scene view of Eurydice, the hamadryad prophet from the BLOOD PRINCE series, and Danika, the fairy godmother to the bad boys of Kingdom from the KINGDOM series. Imagine a world like limbo, where every character ever considered lives in suspended animation. These characters are all waiting on the perfect story to join, a story that will make them a full character so they will live on forever in the pages of a good book. Join us as Danika and Eurydice “interview” some familiar men in an attempt to cast the role of Billy, hero of CRIMSON NIGHT.

Casting the role of Billy, hero of CRIMSON NIGHT

by Marie Hall and Jennifer Blackstream

Danika flitted back and forth through the air, glittering bits of stardust raining from her cloak. She held her magic wand at the ready, prepared to turn the first creature that threatened her or her charges into a pink toad. Part of her was aware that she was a little more hopeful for a threat than she should be. But then again, what she’d had to deal with that evening so far would strain the patience of even the most tolerant fairy-godmother.

“Have I mentioned my gratitude for your clothed state? I understand that when dealing with werewolves, one often has to make allowances for such paltry things as clothing—what with the beast tearing its way from your flesh and all that.”

Kirill’s sickly sweet voice slid through the air and a warning growl trickled from Etienne’s throat as the barb found its werewolf target.

“At least I have a human form,” he snapped at the vampire. “You’re a monster regardless.” There was a slight pause. “Well, I suppose that’s not entirely true. Half the time you’re not a monster—you’re just a corpse.”

Danika rolled her eyes. What had Eurydice been thinking? Surely these could not be the men the hamadryad felt would be good prospects for the hero of Crimson Night? This hero was supposed to be more like a predatory panther, sleek, sophisticated and always watching. Not like the four men standing before her, hot headed, mad, and…well, Etienne did have a certain something, polished and refined with an edge of violence beneath the surface, but there was still something missing. These men were—well determined to try out for the part at least.

Smiling his devil may care grin, Hatter stepped forward. The multi-colored suit he wore sat askew on his tall, lean frame as he cleared his throat, turning dark blue eyes her way.

“’The boundaries that divide life from death are at best shadowy and vague. Who shall say where the one ends and the other begins?’”

“What the bloody hell was that!” she snapped.

Frowning, he waved the notes in front of his face, as if to say the lines. But those were most definitely NOT the lines.

“Poe, dear, mad Hatter,” she gripped her nose rubbing it furiously, “is not the answer to all of life’s problems. Can no one read the lines!”

A new man stepped forward, one she hadn’t seen before. He was tall, and sexy in a careless way. With bold silver hair and a hawk like gleam, he spoke in a voice that resonated with a hint of danger and made the blood in her veins hot, hot, hot.

His words were steel tempered in black velvet, they shivered down Danika’s spine. She licked her lips as he continued.

He smiled, his eyes twinkled, and for a split second it transformed him from a brooding Bruce Wayne kind of hot, to Batman. Way more beautiful and twice as deadly.

Not only was Danika’s mouth gaping, but the other men appeared shocked as well. “Wow.” She clapped her hands, feeling a strange urge to want to bow at him. Which was ridiculous, she never bowed. She turned away before anyone could see her blush.

The leaves of a yew tree rose into the night sky just ahead. The silver moonlight gave it a sort of ethereal glow, a fitting effect for the World Tree. Ignoring a fresh explosion of bickering behind her, she dove forward. If the outraged shouts of surprise from the men behind her gave her a rush of evil pleasure, what gods would judge her for it?

The trunk of the World Tree shimmered and shifted. Pale arms stretched out, seemingly from nowhere. Danika waited for the hamadryad to rise, revealing the human part of her body inch by inch as she lifted herself from the magical confines of her arboreal half. Eurydice opened pale green eyes and offered Danika a warm smile. Suddenly her eyes widened and she lifted herself a bit farther, peering behind Danika.

“My friend, you’re here,” she said excitedly. “Did you bring them?”

Danika crossed her arms and leveled a look at Eurydice that would have shriveled lesser beings. “Oh, aye. And what a treat it was. What the devil were you thinking sending me after these boys? Why, it’s a blessing in itself that there’s not a blood trail behind us! A werewolf and a vampire traveling together?” She reluctantly looked over her shoulder. “And of course not to mention his royal madness currently speaking in rhyme to the toad he’s kept hidden in his pocket. There is something charming about that one though,” she admitted. She eyed Billy, “And that one definitely has potential.”

“Oh, they all have potential.”

Eurydice devoured the four men with her gaze, her hands rising as if she would reach out for them. Not for the first time that night, Danika wondered if her floran friend didn’t have an ulterior motive fore sending Danika after these trying men.

“Shall we begin?” Eurydice prompted.

Check back tomorrow for the second and final part of the vignette!