It has been a while since I did a newsy round-up. I usually rely on The Galaxy Express for my news, but this week I have a few things of my own to share.

Let’s start with the big news from the RT Booklovers Convention. The winners of the annual Reviewer’s Choice Awards were announced and SFR did pretty well.

RIVETED by Meljean Brook was named Book of the Year. 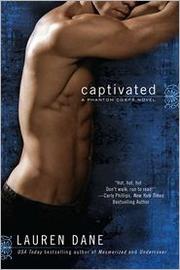 A complete list of nominees and winners is available here: http://www.rtbookreviews.com/rt-awards/nominees-and-winners

On the paranormal side of things I want to call your attention to the best Paranormal Romance pick – HEART OF ATLANTIS by Alyssa Day. This was the big wrap to her Atlantis series. The first book in her new series will be out in a few days, so this is a great time to give her a try if you haven’t already. She writes very action oriented books and she happens to be an all around amazing person. The new League of the Black Swan series begins with The Cursed.

One of the Smart Girls, Misa Buckley, has a new release. Yes, that’s why she hasn’t been doing as many posts lately, she’s been busy writing and releasing some great SFR of her own.  Bayne is scheduled for release today.

Malia dreams of a life less ordinary but when her planet is visited by the Bayne, Destroyer of Worlds, she surrenders herself to him in order to give her people time to collect the tribute that the Overlord demands.

Despite Bayne being as much machine as man and having a violent temper, he rescues her from the unwanted attentions of his second-in-command and gives Malia a glimpse at the battered heart lying beneath the steel and scars.

As they start their relationship over, Malia discovers a man very different to the reputation that precedes him and probes deeper. However, her investigation uncovers a dark truth: a truth that someone wants to remain hidden no matter what the cost.

Two long time friends of the blog have new books out in May.

Cathy Pegau’s Deep Deception (set in the same world as Caught in Amber) is due out May 27. And has already been favorably reviewed by the tough critics at the Smart Bitches blog.

Colonial Mining Authority agent Natalia Hallowell doesn’t always play by the rules, but she wouldn’t compromise a case either. Put on administrative leave under a cloud of accusation, with no support from her boss, Natalia seeks a little anonymous companionship at her favorite bar. But she’s surprised when the woman who catches her fancy starts buying her drinks.

Desperate, Genevieve “Gennie” Caine has no choice but to seduce, drug and tie Natalia to the bed to get her attention. With the Reyes Corporation after something she has, Gennie needs Natalia to open an investigation and distract them long enough for her to get off Nevarro.

Natalia doesn’t trust Gennie–despite the growing attraction between them–but the corporation’s suspiciously high profits and abnormal business dealings convince her that they must be hiding something. She has no idea just how deep the deceptions run… 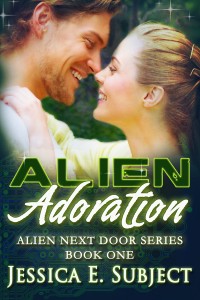 Night after night, Rachel fantasizes about her sexy, playboy neighbor. But in her small town, no one changes, least of all the bad boy next door. But when Luke rescues her not once but twice from disastrous dates, she dares to believe her knight in black leather armor may be the right man for her after all.

Until she learns the truth…

Life on Earth has never been easy for Luke. Stranded as a little boy, he struggled to craft an existence for himself, but he never forgot the first human he met–and he never stopped wanting to see her again. Returning to Hanton, Luke longs for Rachel. Yet, nothing goes as he plans, and Rachel barely notices him. Convincing her he isn’t like all the jerks she’s dated means telling her the truth, but can she handle it?

Can she overcome her fears, or will she deny her alien adoration and leave him stranded once more?

This is the start of a new series.

Over at TGE, Heather has posted an intriguing list of non space SFR.

Geeky Girls Love Scifi has recently had a makeover and some great new content on the movie scene.

Uh, these have nothing really to do with SFR, but  once in a while I have to pimp my gal pals just because they are awesome.

Who Want’s to Marry a Cowboy by the very funny Abigail Sharpe is a contemporary romance out May 7.