Judging by the prevalence of alien cultures that are short on females in Science Fiction romance, I’d say this is a pretty popular trope for the genre. It is often the motivation provided for alien abduction scenarios—another popular SFR trope—but you’ll find it all over the place.

Recently, I was reading the New World series by C.L. Scholey when I tripped upon this trope and stopped to ponder it.  Possibly because the premise (enemies poisoned all the women on an alien world) is so popular.  Scholey takes her world-building far beyond that simple premise, but this is the part that got me pondering. Why do readers (myself included) go for this particular scenario? 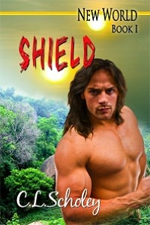 Villains take note: killing off the women = bad idea.
It seems villains everywhere are plotting to eliminate all the females of various worlds or races. Sometimes, though, killing only females seems overly complicated and the machinations required to make the scenario seem plausible can be exhausting. It can make you feel like Dr. Evil’s son in the Austin Power’s movie when he said “Why don’t you just kill him?… I have a gun, in my room, you give me five seconds, I’ll get it, I’ll come back down here, BOOM…” I think maybe the specific reasoning an author constructs to support this trope is best left in the background, as it was in Armor, with other things like the battle for survival and the romance in the foreground. The more you try to explain the trope itself, the more attention you bring to it, the thinner it seems. As a reader I’d rather just suspend disbelief to enjoy the yummy goodness it creates.

Uh, we didn’t think we’d need girls.
But there are other reasons for the female shortage problem. In Laurann Dohner’s Cyborg Seduction and New Species series there are females but far fewer of them. It seems to make sense that if you are building or engineering a race of beings you might not choose to have as many females. All depends on what you’re creating them for and how or if you plan to make more. The book I wrote this year actually falls along these lines.  But I digress… races engineered for a specific purpose offers some common sense explanations. 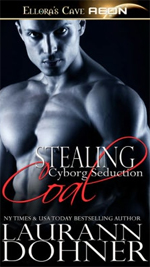 So, why do readers love it?
This trope isn’t exclusive to SFR. It’s most recent gain in popularity in SFR may owe something to the rise and amazing success of the soul mate phenomena in paranormal romance. A cynical take might be that romance readers need extreme measures to believe that a hunkilicious hero would choose, and be faithful to, the ordinary heroine. That thought is a little too depressing for me. Instead I choose to think it is because readers find the idea of a hero who will truly value the heroine very romantic. She is his one shot (or at least a rare shot) at having a mate. Surely, he will think she is the best thing since sliced space bread. And isn’t that what we all want, to be better than sliced bread?

12 thoughts on “Why are all the women on other planets gone?”