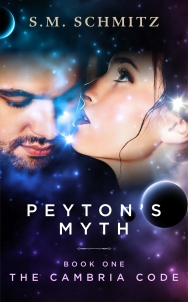 S.M. SMITZ: I’ve always loved to read, and even as a child, I was drawn to books that were beautifully written. I ended up reading a lot of classics. But I also read widely (and still do), so I would go from Little Women to When Worlds Collide. But like a lot of people my age, I also grew up devouring everything written by Stephen King. Oddly enough, I can’t do horror now – either movies or books! It’s like roller coasters: something switched off in my brain after a certain age, and I’m no longer capable of handling either one.

S.M. SMITZ: I’m drawn to a good love story. Even if it’s not a romance, every novel I write features this dichotomy of some personification of what makes this world a difficult place to live in and then its opposite, which I think is love. And it doesn’t need to be romantic love. My first sci-fi series, the Resurrected trilogy, is a romance between Dietrich and Lottie, but the love between friends also figures prominently in the story. I wanted to highlight the importance of all kinds of love and how these relationships give our lives meaning and help us overcome both inner and outer demons. That’s a theme in all of my books. None of my characters exist in isolation; they have friends and family, and those relationships are important, too.

SGLSF:What do you feel makes an engaging hero/heroine?

S.M. SMITZ: This is an interesting question because I recently wrote the first two novels of a series with a heroine in which I turned a lot of “feminine” and “masculine” stereotypes on their head. I assumed Zoe in The Cambria Code series would be a difficult character to identify with because she’s quite different than what readers are used to in fiction, particularly in romances. She can be difficult to like at times, but she has also survived something incredibly traumatic and is dealing with it the only way she knows how. She has an acerbic wit and is extremely sarcastic, which is something I personally identify with. But ultimately, I think her character is just terribly human and I allowed her to be – multiple faults and all. As for male characters, I had a different sort of experiment with my first sci-fi series, Resurrected. I wanted to create characters that were inherently likable even after readers discover that they participate in some horrific activities. I’ve heard from quite a few readers that Dietrich is a favorite – and I do love his character as well – but there’s all sorts of moral ambiguity in this series, which is intentional. I attempted to raise questions without providing my own opinions or answers, and I hope I succeeded.

SGLSF: Where is your favorite place to write and why?

S.M. SMITZ: I do most of my writing in bed. I have my laptop and one of those lap desks. I think the biggest reason I got into this habit is that it’s simply the quietest place in the house for me to write.

S.M. SMITZ: Currently, I’m working on another fantasy & mythology series (my first fantasy & mythology series is The Immortals, which is based on Middle Eastern myths, particularly the Book of Enoch). The first book of The Unbreakable Sword series, Shadows of the Gods, just released a little over a week ago. This series draws on multiple world mythologies, but its primary focus is on the Tuatha Dé Danaan of Irish mythology. But that doesn’t mean readers won’t find some of their favorite characters in this series, although they may appear in unexpected ways! The mythologies of the Greeks, Norse, Slavs, Finns, Aztecs, Mesopotamians, and Egyptians – to name a few – will make appearances as well.

SGLSF: What fictional technology do you think will become a reality in the next 50 years?

S.M. SMITZ: Wearable language translators – researchers are already working on this technology, and I think we’ll see a good, workable version in my lifetime. This is technology that I think will greatly improve at a rapid pace, too, because there will be a huge demand for it from the business world, and as the price decreases, from tourists.

SGLSF: How would you prepare for an alien invasion?

S.M. SMITZ: Hide? I have to be honest: I’ve always known I’d be one of the first to die in a zombie apocalypse or alien invasion. I’ll write the badass heroines who fight back and do so brilliantly, but if I can’t kill them off on the page, chances are, I’m going to lose this battle.