Next Tuesday, 2/16 is release day for Donna S. Frelick’s Trouble in Mind, book two in the Interstellar Rescue series. Today, Donna is talking to us about her new book. And other things. 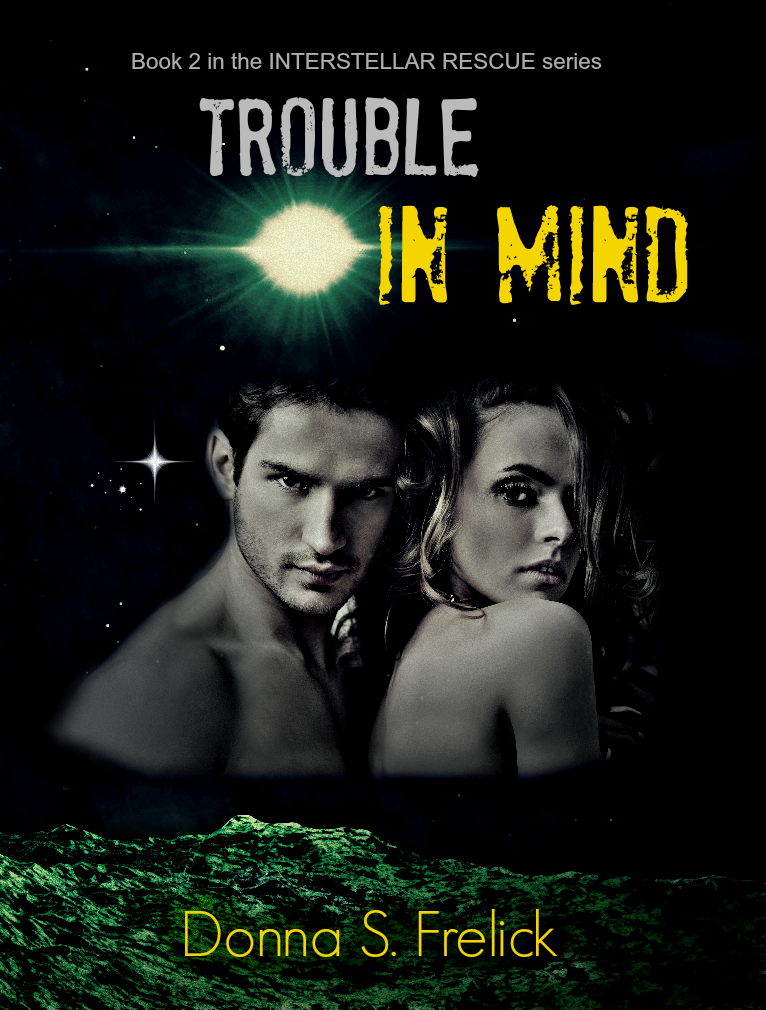 Riley: Thanks for joining us at Smart Girls Love SciFi Romance, Donna! I have found Trouble in Mind to be a real page-turner. I like it even better than Unchained Memory!

Donna: Thanks so much for having me, Riley! So glad you enjoyed Trouble in Mind. I think it’s actually my favorite story in the series so far.

Riley: I am always a sucker for a kid in an adult story. What made you decide to use a child as a key character in Trouble in Mind?

Donna: You know, writers seldom make these decisions consciously. When Jack showed up at the end of Unchained Memory, he just demanded to be a major part of the next book. That’s the way my characters work. In fact there is a secondary character in Trouble in Mind who is pushing for his own book, too, but he’ll have to wait awhile. Sam and Rayna are up next in Fools Rush In for Book Three in the series.

Riley: I assume you were born on Earth. You appear to be human. In your books, some of your characters have abilities that seem supernatural to those of us that were born on this planet. Are you writing from personal experience? Other than writing, what talent(s) do you have that would appear supernatural to me?

Donna: Ha! No, I wish I could say I share the strong psi talents my heroines discover as they are tested by circumstances. All I can claim is a good sense of intuition and a rather overactive imagination. Oh, and I throw a pretty good punch, having earned black belts in two martial arts. LOL.

Riley: Your characters seem to spend a lot of time in a car, traveling. In Unchained Memory, they were being chased. In Trouble in Mind, they are doing the chasing. Are the roads they drive on familiar to you? What are some of your favorite places to visit?

Donna: Maybe it’s a result of my childhood, which involved long trips in the car to visit relatives. One of those trips, when I was 15, took me from Nashville to California through much of the territory I describe in Trouble in Mind. I’d been in many of the places I describe in Unchained Memory, too, but just to make sure I had it right, my husband and I traced the route down from, yes, Big Moose Lake, New York to southern West Virginia one summer before I completed the book. That was a blast. In the next book, Fools Rush In, the hero and heroine spend most of their time in a spaceship. Too bad I can’t re-create that reality!

Um, favorite places. I love my hometown of Nashville, which is pretty obvious from my books. I love my new home in the mountains of Western North Carolina, near Asheville. And volcanic islands are a favorite—Hawaii, the Canary Islands.

Riley: I understand you were recently abducted by aliens. I am very glad you are back home and safe now. Did the experiences of your characters help you to get through what I am sure was quite a traumatic ordeal? Is there anything you want share about your experience?

Donna: *sniff* I don’t really like to talk about it. I’m looking for a sexy psychiatrist to help me through my trauma right now.

Riley: What would you like to tell potential readers about Trouble in Mind – that is not in the book blurb?

Donna: In this second book in the Interstellar Rescue series, we see a lot more of the alien home world of Minertsa. We learn about the Grays and the structure of their society and culture, how they communicate, what their motivations might be in stealing humans from Earth. From that point of view the book is a bit more complex and science-fiction-y than UM, but I still try to stay grounded in human emotions and realities. That’s how I’d define Hearth and Home SFR.

Blurb for Trouble in Mind:

She couldn’t get him out of her mind—

and that’s when the trouble started.

FBI Special Agent Alana Matheson is good at her job, despite a past that would make even a seasoned agent cringe. She has no time for the outside help the victim’s family has brought in on a kidnapping case, no matter how good-looking he is.

But galactic tracker Gabriel Cruz is no ordinary private investigator, and the skills he brings to the job will save both their lives. Because Lana and Gabriel are not the only ones seeking an unusual little boy and his mother. Their rivals in the chase are not of this world, and only an alliance built on the bonds of love can ensure that Lana and Gabriel beat the alien hunters to their prey.

The teacher turned to him, a glint in his gray eyes. “I say we owe the galaxy a civilized Thrane to make up for the butcher that is his father. What is your name, boy?”

“Gabriel Cruz, sir. And I am human, not Thrane.”

Lana sat bolt upright in the unmoving vehicle, her eyes seeking light, her lungs gasping for breath in the airless void of night. The child that Gabriel had been had stood up for the part of him that was human, but Lana saw what the others that day had seen—part of him was not of this Earth. His father was Thrane, his brothers were Thrane, and his memories in her mind showed her everything that meant—the cruelty, the conquests, the centuries of war. The bloodlines, the psi talents, the laws that held them in check.

Then, more proof, if any had been necessary: the image she had first seen when she’d touched his scars, of the fight on the dark side of Azreeni VI. Just one of so many fights on so many exotic planets, the creature dying beneath him just one of so many other unimaginable, inhuman creatures he had seen in his lifetime. Image after image, place after place, memory after memory flooded her consciousness until she was shaking and weak. Was she crazy or was he? Aliens? Other planets?

She clawed open the car door and stumbled out of the vehicle. It was all she could do to keep her feet—and the contents of her stomach—as she gulped in huge breaths of cold desert air. They were pulled just off a secondary road onto a flat stretch of hardpan, and she was alone. Stars wheeled overhead. God, it was quiet! Her heart was like thunder in her chest.

A flashlight winked a few paces away and began to bob in her direction. “Lana?”

Trouble in Mind will be released next Tuesday.  But you can pre-order today if you like.  Here is the link.

Donna S. Frelick was an RWA®GoldenHeart® Double Finalist in 2012 for the first two novels in her SFR Interstellar Rescue series.  She lives on 43 beautiful mountain acres in North Carolina with her husband and two talkative cats.