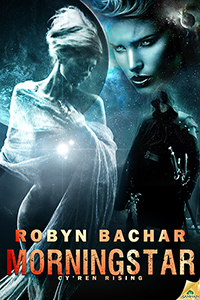 Desire is an addiction that could destroy them all.

Lieutenant Commander Jace Harrow is the second son of House Morningstar—the spare, not the heir. Armored with an arrogant mask, Jace keeps the world at arm’s length to protect those around him from becoming targets for his bloodthirsty brother.

Lieutenant Bryn Viera was a shadow sword and a decorated officer, dedicated to protecting her people. But for the past five years she has lived as a slave and has the scars to prove it. Bryn vowed to escape or die trying—until she met Sabine.

Born into slavery, Sabine never expected to fall in love. Her feelings for Bryn sparked her desire for a new life, but now Sabine is in phase, consumed by the need to mate with a male. Her dream of freedom with Bryn is on the brink of destruction, for to deny the phase means death.

Thrown together by the unforgiving demands of the phase, they must unite to save Cyprena’s people from a deadly new bioweapon—or be destroyed by the scars of their pasts.

Lieutenant Viera stood in the center of the armory, calmly checking the edge of her blade. A trickle of blood went ignored as it slid down the side of her neck from a scratch at her throat. The enticing scents of blood and phase pheromones mixed in the air and Jace growled low. How was he supposed to fight when he couldn’t think straight?

“Ready?” Bryn set her stance and raised her blade.

Jace drew his sword. “What are your victory conditions?”

“You yield or I knock you unconscious. Or I kill you, though I’d rather not. I don’t think Captain Hawke would appreciate that.”

“So you have a problem with women in authority?”

“No.” Jace slowly circled right, and she moved left, matching him step for step. “I have a problem with authority.”

He lunged, and she parried and came at him. His eyes widened as she rained a flurry of blows that drove him back—she was strong and damn fast. That must have been where Soth went wrong. Soth probably assumed he could overpower her, and she struck at him with the speed of a viper. Thankfully Jace was also fast, and he defended himself before going on an offensive of his own. He had to be fast to compete among his brethren, as the other shadow swords tended to be broader and burlier, like Soth. Most of them were born to fight for their house, but Jace had been born to lead it.