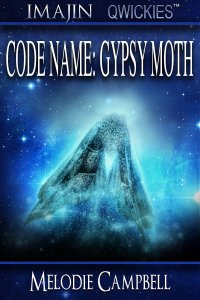 I was looking for a light read between novels. Code Name: Gypsy Moth by Melodie Campbell was described by the author as ‘Scifi-romantic suspense novella with humor.’ Humor sounded good, so I decided to give it a try.

Characters are the best thing about this book. Gypsy Moth is full of colorful characters. Figuratively and literally. Main character Nell steamrolls onto the pages and relentlessly propels the constant action in this little adventure in space. Tough guy mercenary Dalamar is the boyfriend and the genetically enhanced clone soldier Alpha is the straight man in many a humorous conversation. Aliens of different shapes and skin tones add the literal color to the cast of characters.

There is plenty of action in this story. It takes place in a bar, so, of course, there should be a fight or two to make it a real bar. Plus, the heroine is well versed in self-defense, so given the opportunity, she will kick ass. Ms. Campbell does an excellent job writing the action scenes. I had no problem visualizing what was going on.

Despite the wonderful characters and non-stop action, I could not get into this story. I kept looking for a plot and what I found was three different story lines that were not definitively connected and never really resolved. I’m not going to go into detail of each of the story lines but they are 1) Dalamar and Wallen, 2) green guys and Gallistro code and 3) spying for the Federation.

#3 is Nell’s main story, so I’ll address that one. ‘The Federation states were the good guys.’ That is what Nell states in this story so you have to go with it. What makes them good? Don’t know? What makes the other guys bad? Don’t know. Who are the other guys? Rebels. That’s all I know. Oh, and they conspire. The lack of a solid plot left me a bit unsatisfied when the book ended.

Novella – yep – 22,000 words. A quick read. Nice. And there is definitely humor. Since this was my main reason for choosing the book, this pleased me. The clone, Alpha, who does not understand slang, is the source of much of the humor. But Nell also provides a few grinning moments with her smart alecky observations. Code Name: Gypsy Moth takes place on a Charlie’s Station – as in space station. Plus aliens, a clone and assorted tech.  So there is the sci-fi element. Nell claims Dalamar as her boyfriend, though, as of the timeline in this story, they are already a couple. So the romance element was weak, with no real romantic interactions between the two. A secondary couple, clone Alpha and geek Shelley, hinted a cute budding relationship, but it did not get far. As far as suspense, since I kept wondering what the story was about, I guess it Code Name: Gypsy Moth qualifies as suspense also.

I thought this book had a lot of potential, with the great characters and well written scenes and that is almost enough to recommend it. But as a whole, Code Name: Gypsy Moth is merely a series of scenes with well hidden plot.