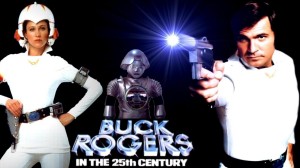 Today we venture into the way-back machine for a show likely only those solidly in middle age and older  remember. It was the heyday of the first entry into the original Star Wars and anything with a robot and a spaceship was thrown together and milked for all it was worth. A lot of the props and stock footage from the original Battlestar Galactica are reused so it has that look to it. The other influence, seriously, was disco. The producers wanted to imitate the style, fashion, and ‘sex appeal’ of the disco era. I’ll give you a moment to stop giggling. 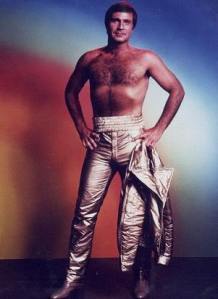 The original Buck Rogers was a comic strip from 1928; later a radio show in the 1930’s to 1940’s; and an early TV serial in the 1950’s. The television version discussed today began as a  made for TV movie which later got theatrical film release in 1979.  From this ‘pilot’ sprang the series.

Brief summary: Captain William ‘Buck’ Rogers (Gil Gerard) is a NASA astronaut in the 1980’s who gets frozen during a life support malfunction and reawakened in the year 2491. The Earth was rebuilt, kind of, after a nuclear war in 1987, so Buck Rogers must face the new century. He is recruited by the Earth Defense Directorate and sent on various covert missions. He has a robot named Twiki. He has a friend/romantic interest, Colonel Wilma Derring (Erin Grey) who is a star fighter pilot. Part of the first season is a fight against Princess Ardala (Pamela Hensley) who wants to conquer earth and make Buck her consort ’cause he’s so manly and whatnot.

Season two, changes around quite a bit. Buck Rogers is now a member of a crew on a ship called Searcher meant to be more Star Trek-ish. Wilma Deering’s role is reduced-it was thought that she needed to be ‘softened’. Instead of the fighter pilot Deering, it’s mostly ‘tennis skirt wearing sit at the computer’ Deering. Buck also gets a side kick alien character-a avian humanoid called Hawk. 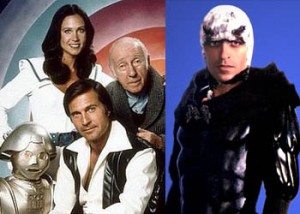 Hawk is not as cool as this Hawk, whom of course went on to be in a truly good SF series. But I digress. 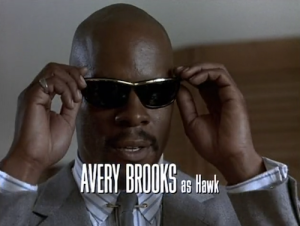 Anyhow, there are all sorts of standard, camp adventures. Amazon women in one episode; another about people made of gold; another about evil satyrs; and one about a mind control hair metal band taking over humanity. (that’s what it looked like to me)

Buck Rogers is not innovative SF. It has lessons about racism, war, religion etc but they are pretty heavy handed and obvious. There were many times in which I abandoned an episode midway because it was just too silly.  Still, it’s family fun.

So, Smart Girls Readers, do you think the upcoming Star Wars movies will issue in an era of SF TV?

12 thoughts on “SF Obscure: Buck Rogers in the 25th Century”