Please welcome Mel Teshco, Shona Husk and Denise Rossetti to the blog today. These three great SFR authors share a little about writing in a shared world in the new ES Siren Series.

World building is always a power trip for a writer, but there’s something incredibly exciting about sharing the experience. In the case of the ES Siren series, the amazing Shona Husk came up with the concept of a space convoy rather like the First Fleet that sailed to the penal colony in Australia in the eighteenth century. There was so much creative elbow room in this idea – the volatile mix of convicts, military and civilians, the uncertainties and perils of a long voyage into the unknown.

But the real fun began when the three of us – Shona, Mel Teshco and Denise Rossetti – put our heads together to create a shared vision of the Earth Ship Siren. We sparked ideas off each other like Catherine wheels! The best part is that one story can grow beautifully out of another and characters in one book can weave their way into the next. Serendipity is a wonderful thing!

In fact, as one thing led to another, it became a little difficult to keep up with the flow. We discovered we had to be careful to keep detailed descriptions of shipboard locations, engineering, communications, weapons, prisoners’ numbers, clothing and, of course, characters. We stored all this information in a Dropbox folder. We exchanged copies of work in progress. We checked with each other whenever we created something new.

We discovered along the way that each of our characters fit exceptionally well into the world all us three authors had created, giving the reader a delicious insight of the Siren through each of our hero and heroines eyes. We hope to carry on that tradition with books #4, #5 and #6 released this November, with a possibility of more to come!

Book 1: Yours to Uncover

Is she willing to sacrifice everything to keep her secret and her lover safe?

It’s the year 2202. Earth is grossly overpopulated and seriously polluted. Rita Songworth has spent half her twenty-two years trying to escape the dying planet. It’s taken the last five of those years to realize making it in the hard-ass infantry is her only way out, via space transporter Earth Ship Siren.

But the journey to Unity, the new colony, isn’t easy. Rita has to resist an attraction to hard, brutish prisoner, Tristan MacFallan, whose masterful hands create more than the beautiful art he’s been assigned to make. His forbidden touch affects her profoundly and he sees things in her no man ever has before. But obeying Kane, her ex-lover and malicious lieutenant, who is appointed to keeping the prisoners under guard, comes at a high price. Is she willing to sacrifice everything to keep her secret and her lover safe?

Book 2: Yours to Command 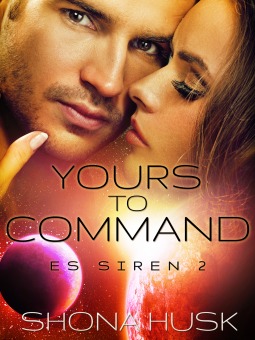 He would do anything to protect her, if only she’d let him.

Corporal Sienna Jade wasn’t given a choice about joining the mission to Unity. Seen as a troublemaker after reporting an assault by a senior officer, the army wanted her gone. Sienna resents the army for assigning her to Earth Ship Siren, and suspects the fleet’s Unity mission will fail. But others would do anything to escape Earth …

Alex Tariel knew his only chance to get a place on ES Siren was as a prisoner, so he stole water rations. As a former construction foreman, his skills make him a valuable prisoner on board, but still a prisoner unable to control his own life. Instead of keeping his head down, he gets involved in the fights set up for gambling privilege tokens, the only currency aboard ship among the prisoners.

About Shona:  Shona Husk lives in Western Australia at the edge of the Indian Ocean. Blessed with a lively imagination she spent most of her childhood making up stories. As an adult she discovered romance novels and hasn’t looked back. Drawing on history and myth, she weaves new worlds and writes heroes who aren’t afraid to get hurt while falling in love. With stories ranging from sensual to scorching, she is published with Carina Press, Ellora’s Cave, Samhain Publishing and Sourcebooks. You can find out more at www.shonahusk.com.

Book 3: Yours to Desire

A man more potent than any drug.

It’s 2202 and on board ES Siren, the brilliant Doctor Lily Kwan has worked in secret to develop an antidote for the aphrodisiac rape drug, sexmeth.

She’d be overjoyed if it wasn’t for an embarrassing problem: the antidote has no effect on her extraordinary reaction to Connor Madison, the Siren’s tough quartermaster. Scientifically, it should be impossible, but the man’s a raging fever in her blood. If a single dark glance sets Lily on fire, a kiss might kill her dead – but what a way to go!

A former gang rat from the slums of a dying world, Con came up the hard way, so when geeky Doctor Kwan tops his hit list of possible drug runners, nothing’s going to save her—not her family’s money, nor her clever mind.

Not even the smile in her eyes.