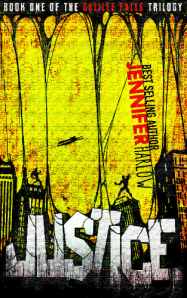 I LOVED this book. It hooked me from the opening line and didn’t let go – I ended up reading the entire thing in a day and am now jonesing for the next in the series. JUSTICE is literary dope.

Joanna Fallon is a cop working Priority Homicide, a department given to very violent crimes, serial killers and supervillains. up, JUSTICE is a superhero story. The hero in question was once Jo’s idol, but she’s hated him since he failed to swoop in and save her father. Now she needs to work with him as supervillain and Justice’s nemesis Alkaline has escaped from prison.

I really liked Jo. She seemed very real with her tough exterior hiding  a whole bunch of insecurities. She’s in love with best friend Justin, sleeping with boss Harry and is dedicated to her job. I liked Harry as well, and the small army of cops who all had clear personalities even though they were minor players.

Justin… well, his secret was obvious from the beginning, though that didn’t bother me – after all, Lois Lane never managed to work out that Clark was Superman, did she? Justin is in love with Perfect Rebecca, who Jo detests. She does eventually warm to the woman, but just a little too late.

Alkaline is vicious. He’s no morals whatsoever, and there is a very tragic scene that proves how little he cares about anyone. Major kudos to the author for being brave enough not to pull punches and write a serious villain in every sense of the word.

If I was to split hairs, the only thing ‘wrong’ with JUSTICE is the prologue. Written in Alkaline’s POV, it does offer an insight into his mind, but overall doesn’t add to the story. It would stand without. However, that is a very minor quibble indeed.

JUSTICE is fast, funny and absolutely fabulous. I cannot wait to read more.

This book was provided by the author for an honest review.

Blurb: It’s hard being a regular police officer in Galilee Falls, a city with the highest concentration of superheroes and villains in the country. It’s even harder watching your best friend, the man you’re secretly in love with your whole life, planning to marry another woman. Detective Joanna Fallon has to contend with both. When the vilest supervillain in the city’s history, Alkaline, the former crime boss who can shoot acid from his wrists, escapes from the maximum security prison, the whole city is gripped by panic. Leading the pursuit is Captain Harry O’Hara, Joanna’s boss and secret lover, and the city’s champion superhero Justice, who caught the villain last time, much to Joanna’s chagrin. Before her father was murdered in a mugging twenty years earlier, Joanna worshiped the hero, but when he disappeared and failed to save her father, that adoration turned to contempt for all supers. After Alkaline attacks too close to home and targets Joanna as his next victim, tough-as-nail Joanna has to contend with her increasing fear while struggling to choose between her life-long crush and her new-found love.

At turns vulnerable and fierce, equally mordant and winsome, Joanna is an earnest yet emotionally damaged heroine, who despite the tough breaks of her childhood sees the good in people and vow to protect her beloved city at all costs. An ass-kicking petite firecracker with no superpowers of her own, she charges after supervillains unflinchingly, never losing her wit even when facing her toughest fight. With a coy blend of whimsy and vivid imagination, she delivers both humor and thrills in an action-packed and edgy blend of comic book cool, fantasy-noir, and bitter-sweet romance.