So remember when I told you last week that we went camping and ended up enduring a torrential rain storm? Well I’m convinced the only reason we didn’t flow away was because we were staked down. As we huddled on the egg crate I listened to air boats throughout the night.

I wasn’t sure just how close to the campsite they were but I really wondered if the river was going to be lapping at my tent. In the morning when the rain had slowed to a drizzle. The hubby and I emerged from the tent to stretch our legs and attempt to start a fire. Much to our dismay the wood was wet and we would have had to have split it in order to get to the dry parts.

Which would have meant waking up the other people sleeping blissfully. So instead we decided to wander around the other remaining campsites just to see what havoc the rain had caused. Now would be good time to mention that I swore that at some point in the night I heard a pickup truck start and drive off.

I thought one of the guys who’d spent the night in a hammock under a tarp had had enough and left but what I discovered at the closest campsite to ours might have explained why I heard a pickup truck, or maybe why the air-boats sounded as if they were close by.

Oysters, tons of oyster shells littered the ground in a mound. 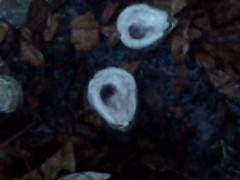 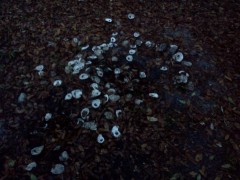 Now why would anybody bring oysters camping? why that many. The only plausible reason I could think of in my miserable, half drowned, sleep deprived state was; Otters. There must have been a family of otter shifters on the river.

I mean who else would have decided a torrential down pour would have been fun? I suppose you could say the guys who like to go out frogging but really what’s the likelihood of that? J Plus there was no way that you could have lit a fire at three in the morning when the rain came down and didn’t stop until six.

So I’m sticking to my theory of Oyster loving, Otter shifters.