I loved the 1990 version of Total Recall back when it was first released. I was an Arnie fan back in the day and even though he’s lost some of his appeal, I still enjoy many of those old films. Commando, Predator, and T2 all still seem like a great way to spend an evening. On the other hand, movies like Running Man and Total Recall are much less fun for me. All of those movies strained even the most generous suspension of disbelief, but Running Man and Total Recall added a level of camp that doesn’t were as well, at least for me. To be honest, Total Recall was always hard for me to watch. Things like the tracker being pulled from Arnie’s nose and the grossly mutated rebel hero had me shutting my eyes or turning my head. They were just more yucky than funny. 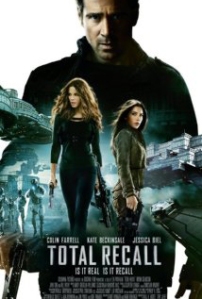 My nostalgia for the movie had me excited for the remake and it ultimately delivered what I was looking for—a version of the movie that was less grossly bizarre and more action adventure. I was surprised to find the 2012 version of Total Recall was ranked pretty low on both IMDB and Rotten Tomatoes. I skimmed through the complaints and most fell into two camps: the don’t mess with my old favorite and the nice effects but the story doesn’t rate a remake. Well, I don’t really expect a deep and meaningful story in my action flicks. The ‘moral’ of the story—it’s who you are now that counts—is still a good sentiment and much more effectively conveyed without the bulging nose shenanigans. Furthermore, I’m a romance junkie these days and the romance is much better told in the new version. Besides, Colin Ferrell is always worth watching.

So, if you prefer this: 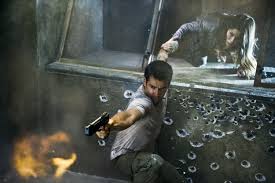 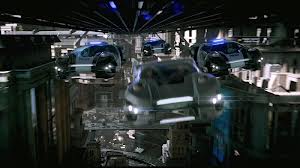 Go for the new!

Have you seen the old or new version? What did you like or not like about it/them?

19 thoughts on “Do you recall Total Recall?”