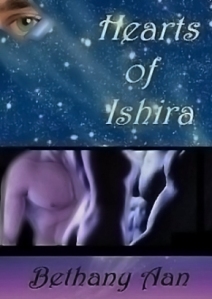 “If I ever get abducted by aliens, they better expletive take me to Ishira”

That’s it folks. I am surrendering my citizenship to Earth. I will now sit in a diner with my kindle, mp3 player, and suitcase impatiently waiting for aliens to abduct me.

I will do ANYTHING to go to Ishira.

Hear that aliens? ANYTHING!!

It took me a long time to read this novel. Not because it was a hard read but only because I wanted to savor every part of this novel. If you were to try to take this story from me, I swear my hair will bristle, my mouth will froth and I shall emit a threatening growl. I am that book-aggressive about this.

Since I am obligated to write about this treasure, I will begrudgingly spare some details. A group of intelligent, beautiful young women suddenly wake up stranded and injured on a planet. Another group of muscled, sexy, cat-like men called Thorsani come to their rescue. The psychic abilities of one of the women-Arianna, and Hunter- leader of the Thorsani, communication between the groups are bridged. As the women heal from their trauma, the Thorsanian men help them heal by not only tending their wounds but also their needs. I’m wiggling my eyebrows suggestively by the way.

Ishira is my planet. Thorsanis are my men. Except for the psychic ability and infinite patience, I can completely relate to Arianna. She cares about the girls (even the dumber ones), she knits, crochets, cooks (ok I don’t do that), explores, gets embarrassed talking about sex but has very awesome sexual fantasies with multiple partners, gets along with animals (I want a kimi. I will trade my dorkus kitten for one), and she’s chubby.

Ok Ms. Author either your stalking me or you are my twin.

The novel has wonderful, delectable, HOT sexual chapters that I dare you to skip ahead. I’ve read quite a lot of romance books. So much so that I tend to skim the sex scenes since most are written the same. The pattern of sex scenes usually play out like a game cheat code: press start-select-Up-Circle-Circle- Down-Circle-Circle-Up-Up-Up-Up-O-O- O – X-X-X-Done. This story though? Oh I read every part. Every part is good. There is no shortage of sex in this novel. Thorsanian men have been stranded on this planet for 10 years without a women. Oh, game on.

The warning I will give about this story is that the first chapter is very jarring. I had to flip back and see if I missed a chapter. Have you ever played a first person shooter game where your character opens their eyes to flying shrapnel and gunfire as you struggle to figure out which button to aim and shoot? Yeah that’s how it felt like for me. After that, it flows as fine and sweet as honey.

As honey is viscous, the story plods at the same speed. There is one antagonist that rears her ugly head now and then but doesn’t become a real threat until the end. At that point, I was so sedated by the exploration and sexual adventures that the threat the antagonist composed was pretty abrupt. As quickly it came, it quickly went away. Very quickly went away.

As a sci fi novel, it still works. The science of how the girls were stranded, how the Thorsanian survives is so well woven that I don’t have to think about it too hard. In this world, it makes sense and leaves more of a focus on the characters and the relationships.

That right there is the core of why I love this story so much. Multiple partner action can usually come off as painful in terms of story telling and physical sequence. Or worse, it’s boring. I can usually read through a horribly written sex scene if it’s entertaining in at least some form. In “Hearts of Ishira”, the multiple partner comes off beautiful, sexy, and meaningful. So well done that it makes you wish that human society was more like the Thorsanian way. I’ll admit, the Thorsanian culture is almost too perfect with its balance of respect and equality, but I don’t care. I want it. I agree with it. Sign me up.

And this story is funny. So many awesome witty jokes. No I’m not going to tell you which ones are funny. It’s just so awesome how the story takes from sexy scene, to romantic interlude, to funny antics, to heart clenching drama, then back to giggling over an inside joke.

I love this story so much. It all just makes sense if I was in Arianna’s shoes (which I don’t think she has on this stranded planet. I would sew clothes (but save underwear for later), touch plants I shouldn’t be touching, demand to see a waterfall, enact order if I can. I would hate to have the ability to hear everyone’s thought, but I would keep it if I could hear animals talk.

I’ll definitely follow up with the rest of the series. Until then, please hand me another soda waitress. My ride to Ishira should be coming any moment now.

13 thoughts on “Review: Hearts of Ishira by Bethany Aan”