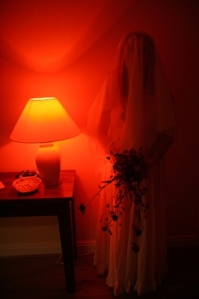 So we talked Dhampir last week.  It occurred to me that while we discussed the off spring of we didn’t discuss the Vampire.  And then I remembered a tweet from Charlee way back when in august which lead me to this post.

Which, lead me to the undead. Yes the undead, who are more than just Vampires.

Though Vampires do tend to get most of the attention, they are not the only ones to be considered undead.  Ghost, ghouls and of course the ever popular zombies make up the ranks of the undead.

As a matter of fact zombies are giving the vamps a run for their money.  In fact one might say the zombies have staged a coup.  But, that’s for another time.  What I really mean to talk about is though these are the undead we’re used to seeing there are still others out.

For instance some would say that the dhampir belong amongst the undead.

I grew up in the Caribbean where we had our own version of a vampire called a soucouyant, who isn’t undead but is a witch/vampire.

Other cultures have their version of the undead. After all we all know about the ancient Egyptians and the Mummy’s.  Come on hands up who saw all three of the Brendan Fraser movies.

A few years ago I read Eileen Rendhal’s Don’t Kill the Messenger and was introduced to the Jiangshi.  Chinese hopping zombies/vampires that kill living people by absorbing their life force.

There are some pretty interesting undead out there you don’t actually have to stick to the usual suspects.

2 thoughts on “The undead are diverse too.”