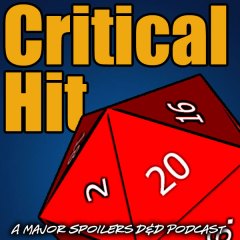 Hands in the air, who will admit to playing Dungeons & Dragons at some point?

I was first introduced to D&D by a college friend. To be honest I really didn’t get it at the time. Later, years later, I lucked into a game with family and friends and it was much more about the role playing. I liked it so much I eventually took a turn at being the game master. It was a great way to learn world-building and story development.  The group played together for a couple of years before we all wandered off the trail.

More recently, my son got more interested in D&D and started trying to get caught up on the most recent addition. He discovered Critical Hit and encouraged me to give it a listen. Critical Hit is a podcast that follows a group of gamers playing a game. One player is a newbie to D&D, one is more like me—previously played, but not as up to date on the current rule sets, the other are experienced dungeoneers. Rodrigo, the game master, is an amazing story-teller and he has a good handle on how to manage the sometimes unruly bunch.  The players have developed great characters and there is a lot of great role-playing. There is also plenty of actions for the combat-encounter inclined. It is a great show for anyone interested in learning how to play, learning how to be a game master, or just enjoying a good listen. It is available on the Major Spoilers website, via RSS and on itunes.

This show has me missing D&D. If only I had time to take up an old hobby, but until that miracle happens at least I have Torq and the Torqeltones to administer a weekly dose of gaming.