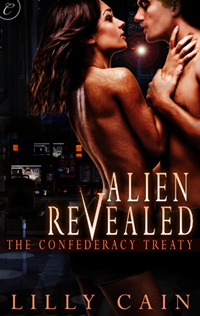 When you’re an alien spy crash landing on a human military base.

When Inarrii agent Alinna Gaerrii crash lands her observation pod on an Earth Starforce base she is mistaken for the psychologist sent to evaluate Major David Brown and his team. David’s team is suspicious, but the possibility that she might be an alien isn’t even on their radar.

In Alien Revealed by Lilly Cain, Alinna and David prove that an unplanned first contact can steam up the pages!

What I loved about the heroine: Alinna is a terrible liar. She might have been a good choice as a remote observer but she is terrible at undercover work. Charming!

What I loved about the hero: David Brown is a military guy who just doesn’t want anything getting in the way of his mission, but he is clever enough to see the big picture and take a chance when the situation changes in ways he couldn’t have expected.

Other cool stuff: The author does a great job weaving the differences in Inarrii physiology and culture into the story. And on the subtle humor side – Alinna’s first experience with human cuisine is hospital food. What a great first impression?

5 thoughts on “When is a case of mistaken identity a good thing?”