Apparently, the love of your life. Sign me up! 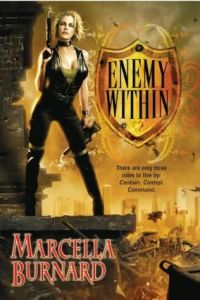 In Marcella Burnard’s Enemy Within, Captain Alexandria Rose Idylle (aka Ari) is on a plagued planet with her father’s research team when Cullin Seaghdh and his strike team take over the ship with the goal of kidnapping her. Ari and Cullen are military officers from rival planetary alliances. They are not exactly sworn enemies, but they aren’t allies either. They do, however, share a common enemy – the non humanoid menace that just might be behind the plagues troubling planets at the edge of humanoid territories. Ari is the only human to ever survive being a prisoner of these alien menaces and that fact has everyone asking questions about her and has Cullin tasked with her kidnapping.

Ari is a fascinating character who has already been through the ringer when we meet her and the author doesn’t hesitate to throw her back into terrible trouble. My only problem with her was how quickly she developed an attraction to Cullin, a man who was there to kidnap her. Once I got a bit further into the book, that problem was easily forgotten. The rest of the story is well told and riveting. Burnard builds an interesting world, layered in intrigue. There are many compelling characters that will likely appear in subsequent novels if the series does well.

What I liked about the heroine: I’ve always been a sucker for damaged characters. Ari questions her own sanity after all she has been through and puts herself through a psych evaluation each morning before she’ll leave her cabin. She’s a tortured character in every sense of the word.

What I liked about the hero: Cullin is a master manipulator, but he uses his powers for good–usually for Ari’s good. He has a cool vocal ability that allows him to influence people with his voice. It could be creepy but it is handled well and adds something a little different to the character.

Other cool stuff: I really liked the medical science angle in this story. From the beginning of the book they have to deal with the possibility of plague contamination.  It sounds dull, I know, but it is really very cool. The mix of military and science also adds a nice tension.

12 thoughts on “What can you get from a plagued planet besides the plague?”