Hi out there in SF Obscure land! This week, let’s talk a bit about a fun comedy-drama show with humor and science and goofy nerd stuff that was Eureka.

Eureka is based around a community of scientific geniuses who work for Global Dynamics- a secretive advanced research facility.  Most of the residents of the town have a genius of some type-the owner of the cafe is a culinary genius; the police deputy is a security specialist. The show generally begins with Jack Carter, the town sheriff being called in to investigate a crime involving one of the scientists or their inventions. Jack Carter is not one of the scientific geniuses, so generally the concepts have to be explained  a clever way to info dump) and he uses his street smarts to solve it. Occasionally, there are longer episode arcs involving government cover-ups, corporate rivalry etc. 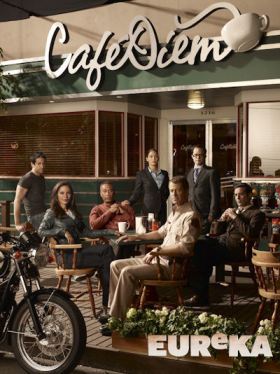 Through five seasons the cast grows considerably. Wil Wheaton and Felicia Day make guest appearances for several episodes. A reset timeline adds Dr. Grace Monroe (Tembi Locke) as Henry Deacon’s wife. And there is an android sheriff. And there is an alternate universe timeline; and a space exploration subplot, and …. a lot of stuff.

It may seem a jumble, but because Eureka sticks to being a comedy-drama it works. It makes a show about science and intellect  a good hour of entertaining TV. I always enjoyed Eureka.

So readers, any fans of Eureka out there? Don’t you wish you can live in a town like that?