Every Wednesday we announce new releases, the week’s bestsellers and a selection of on sale and free SciFi Romance books.

On Sale or Free!

Defying the Alliance by Bobbie Ross

Nowhere in Captain Caspia Jones agenda did it say free the slaves, fight the Novokin Imperial guards or bring home a ferocious, smoldering hot alien dipped in delicious muscles and cooked to a golden perfection.

One spitfire captain, one deliciously sexy alien warrior and one ship…to save the galaxy!

Quote from the book:

Yet my unconscious mind, unrelenting and always vigilant shouted at me – It’s ridiculous, you’ve only known this alien for a day and a half. You’re the Captain. You can’t fraternize with people under your command. These people depend on you. To keep them safe. Safety requires focus and protocol. Romantic entanglements are only a distraction, a distraction you can’t afford – I knew I had to put a stop to this before my body’s rebellion got out of hand.

Peyton 313: Book One of Cyborgs: Mankind Redefined by Donna McDonald 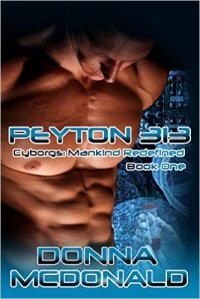 Worst epic fail of her scientific career? Falling for a cyborg she helped create.

Dr. Kyra Winters never meant for her cyber science discoveries to be used for evil, but that’s exactly what happened. Now returning Peyton 313’s humanity is the last chance she’ll ever have to atone. She can’t get back the lost decade, but she can change the present by restoring the cyborg who was once Marine Captain Peyton Elliot.

Certainly her grand plan for rectifying her mistakes didn’t include madly kissing the confused, passionate Marine when he begged her to. The same scientific mind that constructed the cyborg creator code now warned her not to let Peyton’s tempting offers of heaven cloud her rational decision making. Yet it’s difficult to resist the cyborg she’s restoring when he’s also the most intriguing man she’s ever known.

About the Cyborgs: Mankind Redefined Series

This is a science fiction and fantasy series that takes place in the not too distant future. These Cyborg romance heroes are genetically engineered military men who have been cybernetically imprisoned after a near apocalyptic global war. The heroine in Book 1 appears briefly in every book as one by one she and her team attempt to restore each soldier’s humanity. Each book in the series deals with a different restored cyborg. Each story also contains lots of action and adventure, some violence and language, and hopefully a few laughs along the way.

Finding your one true psi-mate was supposed to be a good thing.

Quote from the Book:

“Have any interesting dreams, Red?”

“Don’t call me Red. I’m just here to find out what this means.” She lied.

She knew the second she entered the room what it meant. He was the one. Her psi-mate. A cold blooded killer.

They made the wrong choice. Putting it right requires going into a war.

Lokmane slave Taran Faroukh chose his master. Da’Renna Brykin chose her brother. When Taran is kidnapped, Da’Renna and her brother trek into the Corsican forests to rescue him. With war raging around them, they have to choose again. Will freedom’s embrace be enough to reunite them?

Author’s Note: This novel stands alone and is a great entry point into the A’yen’s Legacy futuristic romance series

Quote from the book:

“There’s two words I hate above all others. You can’t, along with all its variations.” He cupped her face between his hands. “I will find a way, Ren. I always find a way.”

“The book is an excellent exploration of what “freedom” really is and means to different people.” Laurel Kriegler, Zhurrat Reviews

Every twenty years a small group of warriors from Mu Arae 7 come to Earth to find their brides. Andreas captures Terah on the hill near where his spaceship lands and knows he has obtained his bride. He claims her immediately because he knows she’s the only woman for him.

Terah’s running from trouble when she’s captured to be an alien’s slave. There’s nothing she can do to escape…but would she even want to? 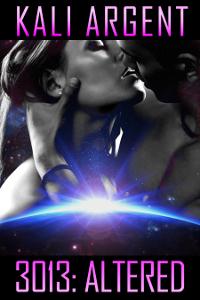 Commander Ivy Dalton doesn’t believe in luck or chance. Everything in her life—her career, her ship, the respect of her peers—she’s worked hard to earn. When she and her crew are attacked during an exploration mission, sending her ship crashing onto an unidentified planet, her only concern is finding a way to contact the Alliance. She never expected a single, tiny incident in the infinite reaches of space to challenge all she thought she knew about fate, destiny, and…love.

For thousands of years, King Kai Blackthorn has ruled over the people of his planet with selflessness and compassion, never taking anything for himself. Recently, however, he’s grown weary, malcontent, and the loneliness that has plagued him for centuries has become too pronounced to ignore. Then all that changes with the unexpected arrival of one sassy blonde with luscious curves and a dangerously sharp tongue.

Caught in the midst of intolerance and corruption, two strangers from different worlds struggle to find a way to coexist. Kai can’t abandon his people, and Ivy can’t imagine a life grounded in one place. But fate will not be ignored. Decisions must be made, compromises that will change the course of their lives. For no matter which destination they choose, the journey will leave them forever altered.

Warrior and Priest by Katie Howe 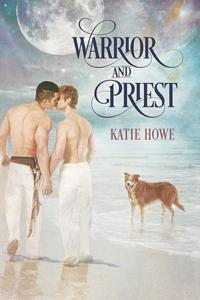 On an earthlike planet ruled by the Elite, a rite called “the Gleaning” is used to select suitable spouses for those of merit. Nico Stamford is a member of the Geisha class. Though he has been trained for marriage all his life, becoming a healer and a priest in the process, all he wants is to cook and open a restaurant. Instead he becomes a candidate for the ritual. He hopes the Goddess will look kindly on him and eliminate him before the final choices are made. Alex DeVrie is a member of the Warrior class who has recently returned triumphant from a clash with an alien enemy. Made a duke of the Sixth Land as a reward, all Alex needs now is a husband. As soon as Alex sets eyes on Nico, he refuses to settle for anyone else.

Tradition says they can part ways after a year and a day. But love begins to grow as they unravel the mystery behind tragic events in the Sixth Land, and they uncover a conspiracy that could change their society. 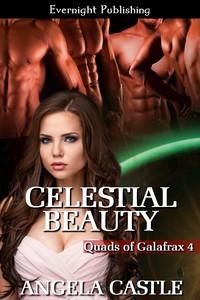 Forced to land their scavenger ship on a remote planet, the last thing Demos quads Zeb, Raz, Kue, and Loc expect is to find is a lovely and feisty human female.

Celeste has survived a life of abandonment and abuse on Earth, being abducted by cruel aliens, and the ship crashing on a strange planet. But can she survive four sexy red alien men, intent on rescuing her and making her theirs?

To win her trust, the brothers make her a part of their crew, assisting in the repairs on their ship. Their friendship blooms into a heated passion that Celeste never thought possible with four alien brothers.

When their new bond is threatened by the very aliens who abducted her, her quads reveal some unique hidden skills, showing just how capable they are at protecting the woman they’ve come to love, no matter the cost. 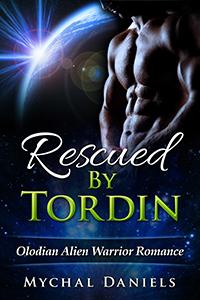 Curvy, intelligent and focused, Kyra Simmons has her eye on the prize. She’s locked her sights on becoming the top technical engineer for the most prestigious space program back on Earth. That is, until her life and plans are turned upside down in an instant on board a maintenance Space Station.

Stranded on the now failing Space station, Kyra needs a miracle to survive. She has no idea that the ‘foreign’ astronauts who show up to rescue her are out of this world—literally.

Lord Tordin, Crown Prince of Olodia, knows he’s outside of the mandates of the Intergalactic Alliance when he intercedes to rescue the survivors of the Earth space station. But there’s something or someone pulling him in.

He’s not prepared for what he finds in the unassuming Earth female. Try as he might to stay away, the pull grows stronger and stronger to be with her. His mission depends on his ability to stay focused and be prepared, but that’s almost impossible with Kyra in his thoughts and dreams.

On the alien mother ship speeding away from Earth forever, Kyra’s biggest problem is not getting back to Earth; it’s how not to fall for this alien Warrior Lord who’s the actual man of her dreams.

Can she find a way to realize her dreams of power and recognition now that she’s been rescued by Tordin?

Catching Up with Recent Releases

Taisia’s sex drive is out of control.

She’s serving on the most ambitious terraforming project ever undertaken, but is helpless in the face of her flaming desire and fears the project may fail.

Captured by slave traders, Mia fears for her freedom, her life, and worse. Drugged by her captors, her body is not her own. When she’s rescued by Jaden, the rugged space trader becomes her only hope of sexual relief for light years in any direction. Then he goes into heat.