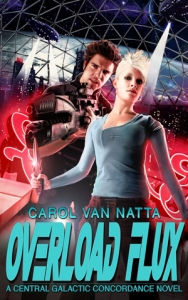 Short blurb: Space opera romance! Someone is stealing the vaccine for a galaxy-wide pandemic. Investigator Luka Foxe and security guard Mairwen Morganthur fight corrupt pharma companies, murderous mercs, and treachery, and must trust each other with dark secrets if they hope to survive.

Ground traffic throughout Etonver was legendarily bad, and Luka counted himself lucky that the current traffic snarl was so far making them only thirty minutes late for the afternoon appointment with the independent testing lab Zheer had found. They couldn’t fly a flitter into the restricted medical district air space near the lab, so they were stuck dealing with the chaos on the streets.

He was glad he’d chosen to sit up front with Morganthur. He often lost his temper in traffic, and her imperturbability at the stop-and-go progress made it less annoying to him. Her light overcoat, in boring company gray, hid a navy corporate suit, identical in cut to the green one she’d worn to the spaceport. He had the impression she valued practicality over style. He wouldn’t call her peaceful to be around, because he was too intrigued by her, but she was somehow calming. She was also the quietest person he’d ever met.

“Morganthur, when they assigned you to me, did they tell you not to talk?”

“No.” Her voice sounded low and rusty, as if she didn’t use it much.

A ground skimmer that was weaving through the lanes came within centimeters of scraping their side panel, but she smoothly adjusted their position to narrowly avoid it.

“Good,” he told her. “I’d hate to inhibit your natural garrulousness.”

She glanced at him with a raised eyebrow and quirked a corner of her mouth in what may have been a smile, but said nothing.

He laughed, delighted to discover she had a sense of humor. “I get the feeling you don’t do this very often.”

“No, have a casual conversation.”

“No.” An opening in traffic had them going faster for a moment, but it didn’t last. Horns sounded constantly, but were muted in the quiet vehicle interior.

“Probably because you’ve been working the night shift and didn’t have anyone to talk to. Feel free to practice your conversational skills on me. It’ll distract me from obsessing about loose threads.” Of course, it wouldn’t keep him from being distracted by her instead. At least she wasn’t an obsession. Yet.

He couldn’t tell from her expression if she was trying to formulate a reply or was simply focused on traffic. After a long silence, she said, “I’m bad with words.”

“That’s what practice is for. Pretty soon, we’ll have you up to fifteen or twenty words at a time, maybe even two or three sentences in a row.”

In between lane changes, she glanced at him as if she was unsure if he was serious or not. Finally she said, “Loose threads?”

It was the first time she’d initiated conversation, so he didn’t mind that it was about work. It was a start.

“The fact that Green never called for the reward. Why the losses are mostly the NVP 70 vaccine made by Loyduk Pharma. Why Balkovsky and Schmidt were in the warehouse at all. Why a theft crew had two merc-grade forceblades for a simple after-hours slice-and-haul.”

“Why didn’t they kill Schmidt first?”

The phantasms from his memory stirred uneasily, so he focused on Morganthur more closely. The spiky, asymmetric cut and darker tips of her pale blonde hair suited her strong but striking cheekbones and jawline, he decided. “They tried to, but Balkovsky got in the way. He was protecting her.”

Her incredulous look said she thought it unlikely that an ex-Jumper needed protecting.

“He was in love with her, which made him feel protective of her. Her waster’s disease was well into stage three, so she was slowing down. He was trying to distract their attackers and give her room to fight. He didn’t know two of them had forceblades.”

He sighed in frustration at facts that didn’t make sense. “I’m not surprised a theft crew had misters, because those are good for derezzing comps and disabling unexpected guards, but forceblades need skill and make for messy kills. Not the usual thief’s choice.”

“Reconstruction told you all that?” She wasn’t exactly accusing him of extrapolating well beyond the actual evidence, but her tone was skeptical.

He realized that it was too fökking easy to talk to her, and now he was on dangerous ground. The reconstruction at the warehouse, what little he’d had time for, had only confirmed what his talent had already told him. “Mostly. Leo was a good friend, so I already knew how he felt about Adina, and that he’d have risked anything to keep her safe. She made it out of the service pretty much whole, but the waster’s was going to force her into retirement soon enough.”

“No, it wasn’t relevant to… wait, you read my report?” She nodded, her face serious. None of his current or previous assistants had ever read his reports. Leo used to tease him mercilessly. Even Zheer had probably only skimmed it. “Most people don’t bother. They’re kind of dry reading for non-specialists.”

He snorted. “Really? Name one.”

“The most recent Etonver traffic study.”

He laughed out loud. “Good lord, why did you read that?” He thought a moment. “Oh, I get it. Driving for me. Has it helped?”

She shrugged a shoulder. “Too soon to tell.”

“What other hobbies do you have besides reading odd things?”

The look she gave him said she wasn’t sure why he wanted to know, or that she wanted to answer. Finally she said, “I run.”

Yet another reason he was glad to have met her. “Would you go running with me? Velasco and Alhamsi won’t.” He smiled at her hopefully.