Sarah Connor is one of those iconic SF female heroes like Ellen Ripley. The female action hero is still far rarer than the male, and it takes time to become a one name phenomenon.

I actually saw Terminator 2: Judgement Day by happenstance. I had never seen the first movie. I rarely watched action movies and Arnold Schwarzenegger…I vaguely remembered Conan the Barbarian but that’s about it. I saw the movie mainly at the suggestion of a friend. We wanted a movie night, not much was playing, so why not this? 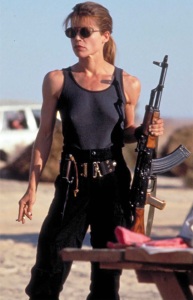 There is no real need to recap. Most people know the basics of the Terminator story and even without seeing the first one, I got the point about five minutes in. Still, it was a fun movie doing action well. And what really stood out was  Linda Hamilton’s Sarah Connor. She really seemed like someone who was ready to take on the apocalypse-tough, resourceful, brave-but her fear of the future very real in her expressions. You could see how her knowledge scared her and made her just a bit crazy. (Linda Hamilton also did a fine job on a great show the original BEAUTY and the BEAST.) The fact than an actress really buffed up for a role was not something that was typical at the time. The athletic female form was not as mainstream as it is now.

So, how does that relate to The Sarah Connor Chronicles?

Well, the premise of The Sarah Connor Chronicles is based on following Sarah as she raises John Connor to the inevitable end of humanity and the rise of the terminators. I remember looking forward to it. It would be neat to watch what the franchise did with the concept in television format.

First, there had to be some techno babble/time travel tinkering to explain why Sarah and John leap from 1999 to 2007 via naked time travel. Second, the need for new terminators since you couldn’t have Arnold.  A bad one, Cromartie,  played by Garrett Dillahunt. and a good one, Cameron, played by Summer Glau. And the show needed something to do. Nonstop terminator fight scenes won’t get you a weekly show so there needed to be drama: a cute female terminator, John’s adolescent goings-on; an FBI agent whose not sure he believes all this, supercomputers and espionage. Later we get a third terminator with shape-shifting ability and a time travel resistance fighter sent from the future.  Lots of stuff.

How did it work? For me…okay. I didn’t LOVE it, but I didn’t think it was a terrible show. It actually got better in the second season before it was canceled. The actors grew a bit into their roles and perhaps the writers did not feel so locked in by the ‘terminator mythology’. Some people did not care for the changes, but I didn’t mind. And there were some good character actors. I thought Richard T. Jones was particularly good as FBI agent James Ellison. And Brian Austin Green stood out as Derek Reese (brother of Kyle Reese).

The TV Sarah Connor wasn’t quite what I would have like. Lena Headey did a suitable job with what she was given but never seemed quite as hard and tough as she needed to be. It’s not as if Lena Headey can’t act. Cersei Lannister is way, way tougher with the crazy element the TV Sarah Connor needed but never had. Summer Glau’s Cameron tended to steal the scenes with more presence and perhaps she’s just more comfortable with SF-Firefly and a strong guest appearance on 4400.

Still, if you’ve go the time The Sarah Connor Chronicles is worth checking out. I guess I need to go and see Terminator: Genisys now.

So readers, anyone seen Terminator:Genisys yet? How does the new Sarah Connor stack up to the rest?