That’s a big question. LOL! I was one of those kids who started reading unusually young. I had hundreds of books on shelves in my bedroom. The first I read from cover to cover was Black Beauty, and I was in second grade at the time. Over the years, I remember being captivated by Bram Stoker’s Dracula, Tolkien, I remember picking up a copy of Georgette Heyer’s Devil’s Cub and was enraptured with the hero’s father, the wicked Duke of Avon. I read westerns, science fiction, fantasy and classics. I read Aleksandr Solzhenitsyn’s One Day in the Life of Ivan Denisovich when I was in the fourth grade. That one really hit me.

I like happy endings. LOL! Most fiction revolves around relationships, and there’s no relationship more intense than love. It’s universal. Romantic love crosses boundaries that are often insurmountable. I enjoy exploring relationships in science fiction because I can do away with many of the modern taboos we face. I can have a human culture on a planet that is totally accepting of same sex relationships, or I can bring together characters of different species. There’s a lot of freedom for the author in this genre.

Well, I like them to be active in their own destiny, particularly a heroine. While I certainly love a feisty, kick-ass heroine like Annabelle Oakley in Belle Starr, I once wrote a heroine named Annie Tanaka who was restrained and very cerebral. She had crippling fears, yet worked through them. She was amazing to write.

It’s the same with a great hero; I like a man who thinks and feels and has imperfections and fears. I don’t like flawless, all powerful heroes. There’s a character in a historical romance by Elizabeth Hoyt. He’s a duke and is literally one of the most powerful men in the country, and he knows it. By the end of the book, he’s so undone by his love for the heroine, he’s literally transformed and humbled, yet he’s still the essential person he always was. That’s the sort of hero I love to read about! 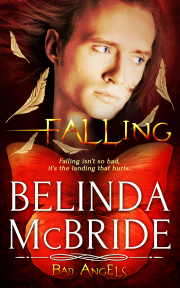 It really can be anything…a sound or a smell. An object in a museum or the feeling I get when I listen to a song. Once, I came up with the entire plot of a story while I was donating blood! My creative process can be stubborn…sometimes I’ll chew on a story for weeks and weeks without ever writing a word. But by the time I open the document, I’m ready to go. Other times, it’s a little here and a little there. But generally at some point, something snaps inside me and I go into overdrive.

My most recent project is THE TENTH MUSE. It’s a fantasy based on Greek mythology. In it, Aphrodite runs a security agency in Manhattan, with the express purpose of reining in rogue deities who might expose the existence of the gods to humanity. Dita must send an operative after her own son Eros, who unveiled his wings in a video that went viral. She sends a young muse named Rees to capture Eros, but in turn, the God of Love captures the heart of the young god. It’s a fun, gender-bending story with so many great characters to play with. It’s currently with my agent and hopefully will find a home soon.

SGLSF: If you were a time traveler where would you go?

Well. That question poses a problem because I am a historian by training and I’d have SUCH a hard time deciding! I’d probably choose London in the late 18th century. I love the city and it would be so cool to see it during that period. But darn…Rome…Egypt…Greece…Central America…so many times and places to visit!

Well first, it would have nice memory foam bunks, and a cushy work station with ergonomic chairs. Comfort is everything! I’d get my daughter Amanda to help decorate it because she’s been all over the world and has some really cool stuff. I’d want a really long circular corridor because I’d have a dog or two with me and since I have Salukis and Siberian Huskies, they need to run! I guess they’d have to wear bells or something so they wouldn’t run down the crew by accident. The hold would have plenty of storage space because I tend to get really cluttered if I don’t have space to stash all my craft materials. And somewhere, there’d be a bathtub. Cause I like bubble baths.