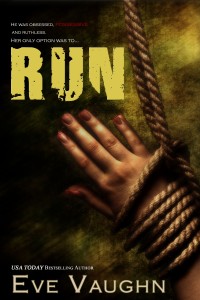 We are happy to welcome Eve Vaughn to the blog.

RK:  What got you started writing romances?

EVE: Romance has always been a favorite genre. My mother gave me my love for reading when she used to take with her to the library. I would read everything I could get my hands on. But then I discovered the harlequin romance books she’d check out and I read a couple on the sly and was hooked ever since. My love for reading turned in to my desire to create my own stories and it was a no brainer what genre I wanted to write.

RK: Do you have a writing routine?

EVE: I usually write late at night when the family is asleep in bed. It’s the one time, I actually get peace and quiet.

RK:  Your recent novel, RUN,  is a dystopian romance-a bit dark and edgy. Could you tell us how you developed your hero and heroine?

I actually got the idea for Run from a news story I read a few years back called “Hunting Bambi.” It was about men who would pay to hunt naked women and they video tapped it. True story. Since that news story, there has been some debate about its validity but for me, the seed had already been planted. As for my development of my H/h. I’ve always wanted to write about the villain getting the girl and to be perfectly honest, the “Hero” is my story is not a nice guy. But I’ve always believed that no one is born evil (unless of course they’re a true psychopath), so I wanted to create a complex character who appears a certain way but underneath is someone completely different. As far as the heroine goes, I wanted to someone who was strong enough to go toe to toe with the male lead.

RK: You write standalone and series’. Which do you prefer? Do you plan out a series in advance or does it just happen?

EVE: Standalones because once you write the first book in the series, you pretty much have to stick to the rules you’ve created even if you want that second book to go a different way. Usually when I start a series, I have a pretty good idea what I want to happen, but like with any story, they sometimes take a life of their own.

RK:  What are some upcoming projects for you in the future?

EVE: I’m in two upcoming box sets with a great group of authors featuring all new stories in each box set. Also coming is The Kyriakis Legacy, book two in the Kyriakis series.

and for a few fun questions….

RK:  If you were to play a guest part on an SF/Fantasy TV series, what series and what character would you play?

EVE: If I could be any character in a SF/Fantasy show it would be a tie between Arya Stark from Game of Thrones and Lt. Abbie Mills from Sleepy Hollow. They’re both really savvy, kickass heroines.

RK:  Which would you rather be able to do: fly or turn invisible? Why?

EVE: I’d rather be invisible because I could pull a lot of fun pranks on people.