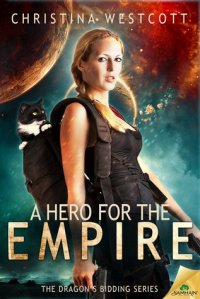 Summary: A Hero for the Empire is the first book in Christina Westcott‘s new The Dragon’s Bidding Series.

This futuristic tale about a militaristic empire, which has fallen into the hands of an immoral dictator.

Commander Kimber Fitzwarren is a cyberneticly augmented elite body guard whose life is being cut short by the very things that grant her her enhanced speed and strength. Her mission is simple, recruit ex-imperial turned mercenary, Wolf Youngblood, and get his help to find Arianne Ransahov. Ransahov is a military hero, and has a valid claim to the imperial throne. However, she went missing years before on a primitive planet outside the empire’s control.

Youngblood left the empire in disgrace after punching the then emperor in the face.  He has spent years being a soldier for hire and running his own mercenary company.

When Fitzwarren appears in the middle of the night he is understandingly skeptical, since he just survived an imperial assassination attempt. But, he is the only one who can find his one time lover, Ransahov. The two team up to find the Empire’s much needed Hero, and non-stop action and adventure ensue.

Positives: This story is very accessible Science Fiction Romance, with a lot of almost fantastical elements, like telepathic cats, and immortal humans. Honestly, to me, it was reminiscent of Anne McCaffrey, with the science aspects being present, but not emphasized, and the human interactions being forefront.

The romance was very satisfying without feeling rushed, and the characters were all well developed.

Negatives: If you like your sci-fi more sci then fi….this might not be for you. The scientific aspects were mostly glazed over without much detail about faster than light travel, or the augmented humans, or even the aliens.

Also, the cat thing got a little out of hand. I love cats, I have 3 rescues myself, but even I started thinking, okay, I get it, there is a telepathic cat. Jumper ended up being the hero of the story just a few too many times in my opinion and it started to wash out the greater plot and love story.

Overall: This was a great read!  Other than the few complaints I mentioned, it really was very well executed, well written, and well produced story.  Definitely will be keeping my eyes open for more stories from this author, and in this series!

6 thoughts on “A Hero for the Empire by Christina Westcott”