Remember when they rebooted the BIONIC WOMAN? Remember? If you blinked, you may have missed it.

Eight episodes were aired in 2007. Everyone blamed the Writer’s strike for its demise. Maybe. 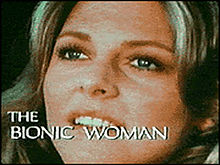 To recap…The Original  The Bionic Woman aired in for three seasons between 1976 and 1978 starring Lindsay Wagner. It was a spin-off from The Six Million Dollar Man. Lindsay Wagner played Jamie Sommers, a pro-tennis player, who is injured in a skydiving accident. Thanks to intervention by her boyfriend Steve Austin- the six million dollar man- she is given bionic implants. A bionic arm, bionic leg implants with super speed, a bionic ear. She also had a bionic dog named Maximillion, that ran at super speed and had a bionic jaw.

I am old enough to remember this show and pretending to be a bionic woman. I loved making my own sound effects running around in the yard pretending I had bionic super speed. Those were the days.

The Reboot starred Michelle Ryan as Jamie Sommers. This time, she’s a bartender  with a younger sister to take care of. After a car accident, her boyfriend implants her with advanced prosthetics (legs, arm, ear, eye, and nanobots that heal) and she gets recruited for an underground covert ops type of thing.

Clearly, the network wanted a different angle than the original. The original was fun, but a bit on the goofy side, and this looked to be more of an action based covert ops sort of show.

The problem was that it never quite came together. The Writer’s strike probably hurt it, but I feel like it suffered from casting choices. Michelle Ryan is not a bad actress but she was overshadowed by Katee Sackhoff who played Sarah Corvus. Corvus was supposed to be a guest spot role as Jamie’s nemesis-  an earlier bionic woman gone wrong.  Corvus may have been insane or maybe just malfunctioning; she claimed to have all sorts of secrets about the covert group; she had an affair with the special operations officer Jae Kim (played by Will Yun Lee) which made him all screwed up. In the end, this storyline overshadowed Jamie Sommer’s-and the episodes without the Corvus character were a bit dull. In one episode she goes to South America to help in a covert op (despite having no experience whatsoever); in another she goes undercover at as a British student (Ryan using her real voice rather than the American accent she uses for the show)  for some reason that I quickly forgot and lost interest in, mainly because the only point of the episode seemed to be to allow Michelle Ryan to drop her fake American accent for a change.

(Was there any reason the Bionic Woman couldn’t have been British? Is she required to be American? The show was filmed in Canada, so why not Canadian?!)

Maybe what the new Jamie Sommers needed was a bionic dog.

So, Smart Girls Readers, tell all in the comments. Are YOU fit to be a bionic super-person? Defend your choice.