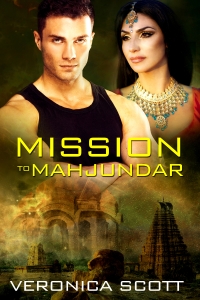 An attempted assassination left Princess Shalira blind as a child and, now that she’s of marriageable age, her prospects are not good because of her disability. She’s resigned herself to an arranged marriage rather than face life under the thumb of her cold stepmother. But then she meets Mike Varone, a Sectors Special Forces officer sent to Mahjundar by the intergalactic government to retrieve a ship lost in her planet’s mountains. After Mike saves Shalira from another assassination attempt, she arranges for him to escort her across the planet to her future husband. She’s already falling hard for the deadly offworlder and knows she should deny herself the temptation he represents, but taking Mike along to protect her is the only way she’ll live long enough to escape her ruthless stepmother.

But what should have been an easy trek through Mahjundar’s peaceful lands swiftly turns into an ambush with danger around every turn. Shalira’s marriage begins to seem less like an arranged union and more like yet another planned assassination. The more they work together to survive, the harder it becomes to stop themselves from falling in love. Caught in a race against time, can they escape the hostile forces hunting them and make it off the planet?

Taking a swift glance at the small area of greenery and ruins under discussion, Mike didn’t see any reason not to let the lady have a few minutes to worship, if doing so meant that much to her. “Look,” he said, “The horses could use a break. If visiting this shrine is so important to Her Highness, why not take advantage of the pond and the shade for a few minutes?” He touched her arm. “You weren’t planning on a long stop here, were you?”

“No, I suppose not. I only want to offer a quick prayer,” she said. “Will you escort me?”

A few moments later he was walking beside her, guiding toward the tumbledown ruin set in the midst of seriously overgrown trees, next to a small pond and a gurgling stream. The rest of the column had remained behind, on the fringe of the oasis, per Shalira’s request.

He felt a cool breeze, the first one of the day.

Shalira stumbled over an exposed tree root and he cursed himself for inattention even as he kept her upright. “I’m sorry, I’m not a very good guide. You’d probably have been better off with Saium.”

“I wanted you to see this,” she said. “No apologies needed.”

“Why? Why did you want me to come here in particular?”

“I think you don’t really want to be on our planet, nor riding along with me in a slow caravan. I’ve heard you didn’t like the crowded capital or the palace,” she said. “I was hoping this place might give you a different idea of Mahjundar, to take with you, when you leave.” Her lips curved in a mischievous smile. “And I liked the idea of a few moments alone, out of the saddle. Do you object?”

“Not at all. I apologize if I’ve been taking my impatient mood out on you. Nothing personal, Your Highness.” He helped her climb a few crumbling stairs and they stepped into a pavilion, open to the sky. Lush grass grew up between the cracked flagstones and flowering vines wound around the pillars. “It’s quite beautiful. Would you like me to step aside while you worship?”

“Very kind of you. I need to be standing in the exact center, please.”

He led her to the round mosaic in the middle of the platform, colors still bright. As they stepped onto the slightly upraised pattern, there was a sudden trill of musical notes and a brightly colored creature fluttered around his head. Automatically he recoiled, free hand going to his gun.

No doubt feeling him tense, Shalira crowded closer. “What is it? What’s wrong?”

“Are we likely to be in any danger from a bird-butterfly kind of thing?” Focusing on the tiny, brilliantly-hued creature as it fluttered around him, Mike felt a little silly. But there were deadly predators on other worlds that seemed just as harmless at first glance and it wasn’t his nature to take chances.

“I’m sorry, a what?” Her forehead wrinkled as she puzzled over the term he’d used in Basic.

“I don’t know what to call it in your language. They weren’t mentioned in our briefing. Some kind of flying warbler?” The creature set down on his shoulder for an instant, fuzzy antennae vibrating, and then launched itself into the air with another trill of bell-like notes that seemed too loud to be coming from such a tiny being.

“A myrdima of Pavmiraia! Do you really see such a marvel?” She turned her head left to right. “I thought I heard music.”

“It’s flown off now, to the trees. It was pink and purple and red, with furry white antenna. About the size of your fist.”

“We’d be blessed indeed, to be serenaded by Pavmiraia’s songbird. None has been seen in this area of Mahjundar for centuries. They withdraw, as the old gods withdraw, because the people’s faith wanes.” She shook her hand free of his, not rudely. Arms outstretched, she twirled, dancing, humming under her breath. She made graceful hand movements in time to her tune as she swirled. Pausing for a moment, she said, “I feel so free here, momentary though the sensation may be. I haven’t felt so unencumbered since I was ten and my world fell apart.”

Not knowing what to say to her personal revelation, but feeling pleased she was happy, Mike leaned on the nearest pillar, scanning the ground for snakes or any other menace. He hoped Vreely would let Shalira enjoy her brief excursion for a bit longer. The man had been impatience personified since they’d left the capital city.

“Uh oh, look out, the whatever-you-called-it is back, with a friend,” he said. “Stand still and maybe it’ll land on your hand.”

She closed her eyes and extended one hand, giggling a moment later as the little creature settled on her outstretched fingertips. “That tickles.”

“They have tiny, fuzzy feet,” he told her. “Gave me goosebumps.”

A green-and-blue companion followed suit, touching down on her other hand. Shalira began to sing in a lovely, high soprano and after a moment the myrdima joined in with their crystalline three notes. Mike thought he’d never heard anything so beautiful, on any world. As Shalira continued to sing, in a language he didn’t understand, more of the tiny warblers arrived, in a rainbow of colors, each adding its own three notes to the performance. They placed themselves on the princess’s hair like jeweled ornaments, and more hovered around her in a cloud. Entranced, Mike thought there must be several hundred in all. A few even floated over to where he stood, although none landed on him. The colors ornamenting the wings shone in the sunshine, particularly vibrant against the drab, dusty landscape.

If they’re waiting for me to sing, they’ve got nothing but disappointment coming. He bit his lip, not wanting to make a sound that might interfere with Shalira’s serenade. He wished there was a way to record the scene, or to somehow share it with the princess, who would never know what a beautiful picture she and the magical creatures made. He locked the vision away in his own memory, as one of the most special moments of his life, an unexpected grace note in the midst of a tense and frustrating mission.