Today’s interview coincides with the release of  Guarded, the second book in Mary’s Tidewater Series. To celebrate Mary is giving away two signed print copies (US and Canada addresses only). Enter for a chance to win! a Rafflecopter giveaway Giveaway ends Friday 8/9/14 at midnight . 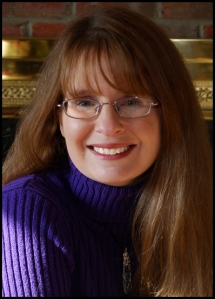 RK：Your manuscript for Tidewater #1 SPIRITED was a finalist in several contests and even won an award before it was accepted by Berkeley Sensation. Could you tell us about your experiences in working with the manuscript and why you believed in it so strongly?

MARY: This story was started then stopped about halfway through. I set it aside but picked up again at the urging of my critique partner. She loved the hero, often referring to him as her book boyfriend. So, I picked up, polished off the beginning and entered it into five contests. It finaled in every one. I was shocked and after I won the Where the Magic Begins contest, I had to hurry and finish the book, because I had a full request from Berkley Sensation. And the rest, as they say is history.

RK: What made you interested in doing a paranormal romance series?

MARY: I lived in Maryland for the first half of my life and Virginia for the second. Both states are rife with ghost stories. I was even a tour guide for a haunted civil war prison camp while I was in college. So ghosts naturally (or is that preternaturally) found their way into my stories. I’m not sure I know how to write a story that doesn’t have something paranormal in it.

RK: What is your writing schedule? How do you balance writing, work, and family life?

MARY: I write in fits and starts. I usually need to kick start my writing with an intense weekend-long writing retreat. Then I’ll write a first draft in less than sixty days. I’ve tried to write everyday, but I have hard time doing that. I end up staring at the screen or being inspired to scrub the toilet. I think I need that pressure to produce quickly.

Balancing writing with family life can be a challenge…when the kids are home for the summer. I feel like if my children are home, I should be spending time with them. Let’s just say, they don’t lack for mom’s attention. J

RK: What do you think about the changing publishing landscape and how do you fit that into your writing career plans?

MARY: I think if there’s someone to buy the book, whether digital, print, or audio, I’ll write. My career plan is to continue to grow my readership and to write more books. Simple plan, right? LOL 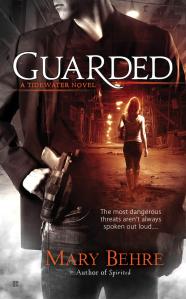 RK: Could you tell us a little about your latest release GUARDED & your future plans for the series?

MARY: GUARDED (A Tidewater Novel #2) features Shelley Morgan. Shelley was mentioned in SPIRITED. She’s Jules’s middle sister and also a psychic. Shelley is a veterinarian who speaks to animals. Dev is also back. He is the hottie cop and love interest of Shelley.

A psychic veterinarian who can talk to everything from naked mole rats to ferrets, stumbles onto an exotic animal kidnapping ring. When a zoo owner is murdered and all signs point to the vet as the killer, she enlists the aid of her super sexy cop friend. Will he be able to help her clear her name before he’s forced to arrest her?

The Tidewater series will continue with ENERGIZED (working title). Hannah, the youngest of the three Scott sisters, makes her appearance in Tidewater. Hannah has her own psychic crift. She’s a psychometrist. One touch of a metal object and she’s in the head of the person who handled it before her.

Unlike her sisters, Hannah is completely comfortable with her crift and even enjoys her mental trips through other people’s memories. Until the day she handles an object touched by a serial killer. Skating through his memories puts Hannah’s sanity at risk.

There’s murder, suspense, and a psychic love-connection when Hannah meets Niall, the hunky Marine who needs her help to find his brother. The brother has been taken by the serial killer. Can he ask her to put her mental health on the line? Can she walk away knowing if she doesn’t help, an innocent will die?

RK: If you could make a soundtrack to describe your life, what songs would you choose?

MARY: Eclectic. I’d have everything from Phil Collins to DeBussy to Nickelback to Nine Inch Nails to the soundtrack from The Little Mermaid. It all depends on my mood.

RK: If you were trapped in a television show as your real life, which would it be and why?

MARY: Home Improvement, although my husband is far more likely to make his inventions and tweaks work than Tim. Like Jill, I didn’t go after my dream career until I’d had children. Like Tim, my husband, is very supportive of my career. Like the television show, my boys find creative and often innovative ways to get into trouble. I live in a house full of testosterone, dogs, and laughter. And I wouldn’t want it any other way.