Since TRUE BLOOD is drawing to a close, I thought about some of those other vampire series in the last decade or so  that didn’t last quite so long. 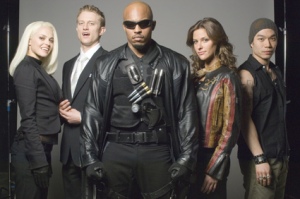 This short lived show was derived both from the comic books and the movies. It starred Kirk Jones as Blade and Jill Wagner as Krista Starr  an ex soldier who joins Blade in taking down vampires. Nelson Lee was cast as Blade’s assistant/tech genius type of person, Shen. It did well in the ratings, but was not renewed for a second season, the official reason being the cost for the then fledging network.

Actually, I rather enjoyed BLADE: THE SERIES. I had somewhat of a post-apocalyptic look. It wasn’t a fantastic series, but I thought it had potential. I enjoyed Jones’ Blade portrayal more than Wesley Snipe’s movie portrayal, actually. (apparently Snipes was going to be in the TV series, but the deal fell through).Towards the latter episodes, however, there was sharp change in tone to more of an Anne Rice type gothic vampire style which didn’t bode well. How it would have played out was anyone’s guess. 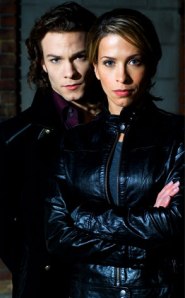 BLOOD TIES was based on Tanya Huff’s enjoyable paranormal series’. There are differences, but I liked the television adaptation. Christina Cox plays Vicki Nelson-an ex-cop forced into retirement due to a disease that is destroying her vision. Christina Cox had played guest parts on many shows (DEXTER, STARGATE). She was also in CHRONICLES OF RIDDICK  and in her career as a stuntwoman did boxing stunt work for Hilary Swank in MILLION DOLLAR BABY. Christina Cox is practically her own superhero.

Kyle Schmid plays the vampire Henry Fitzroy, based on the historical figure of Henry Fitzroy, Henry VIII’s illegitimate son. I loved Kyle Schmid’s vampire. I thought he was a wonderful  and the sexual tension between him and Vicki, always implied, but never acted on, was great.  Huff’s books tend to be detailed and well-researched; taking well-worn tropes and makes something new. The series had a lot to draw from. I was very disappointed when it was cancelled. 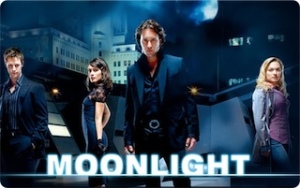 MOONLIGHT was another short lived contribution to the vampire show cannon, starring Alex O’Loughlin before his HAWAII 5-0 days.  He may be easy on the eyes, but he wasn’t terribly impressive as a vampire. It’s never quite convincing. He comes across as just a regular guy with a special diet of blood and that’s about it.  Mick St. John is a private investigator turned into a vampire on the night of his wedding by his bride, Coraline. Beth Turner(Sophia Myles) is a internet reporter who helps him solve various cases and has an old connection to Mick though she doesn’t realize it. It’s not a terrible show, but it doesn’t stand out. Still, there are a few good moments; the episodes are watchable; and if you just kinda have that hankering for anything with a vampire watching a few episodes of MOONLIGHT won’t hurt.

So readers, what are some of those short-lived vampire series’ that you remember? (For good or ill)