I was finally able to wiggle time to read KATE SERINE’S novella, which falls between books one and two in The Transplanted Tales–which came to my attention when our very own Chudney spotlighted GRIM REAPERS in PNR back in April. And let me just say, IT WAS FREAKIN’ AWESOME! More on that in a moment. 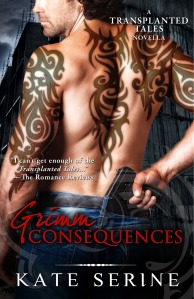 You reap what you sow…
Saying Nate Grimm has a dark past is an understatement. Fortunately, no one’s bothered to look too closely at the Fairytale Management Authority’s lead detective and part-time Reaper. And that’s the way Nate wants to keep it. For after centuries of torment and loneliness, he’s finally found happiness with the hot and hard-charging love of his life, Tess “Red” Little.
Of course, his love for Tess is the reason there’s a posse of Reaper judges after him, led by a sadistic bastard acquainted with Nate from once upon a time. Now, Tess will pay the price for Nate’s transgressions unless Nate severs his ties to the transplanted Tales—and Tess—forever. His enemy has the advantage in speed, malice and brutality. But the Reapers have underestimated the depth of Nate’s love and devotion. And the fury of his wrath…

Here’s what I thought: So, I already said it was awesome. Here’s why. The story is told in the hero’s point of view and opens after the first story ends. Now, I haven’t read any of the other full- length books in the series and it didn’t matter. I was able to follow the storyline without difficulty. From the beginning, it is obvious Nate is truly, madly, deeply, in love with Tess. There’s no doubt in his mind, or anyone else’s mind, whatsoever. Just as clear is the absolute certainty he would sacrifice his eternal soul to protect her, time and time and time again. And he has, even though he has no idea if she loves him back. At least, not the “real” him because he’s never told her the truth about who he was in his human life. He knows she loves the man she thinks he is, but worries she would despise the man he was—a man who brought only death and destruction to others. When his old enemy seeks revenge by taking Tess, Nate has to unleash the darkness within him to save her and then must destroy not only his enemy but himself. But, love is a tether that knows no bounds and doesn’t weaken through trials, it grows stronger. And Tess isn’t about to let him die any more than he would’ve let her die.

I loved the author’s voice and her unique blend of fairy tale characters mixed in a contemporary setting. Nate’s internal observations of the world carried well. Especially during his encounter with the Jabberwocky when his body was shutting down but he focused on Tess because she was the one in danger; then, when Nate possessed Tess’ body after Demetrius reaped her soul and Nate was trying to saving her, I thought it was very classy of him that he didn’t stop to feel up her boobs once he was in her body. Oh, and, it was very sweet how he worried about how she might hurt once her soul returned after he rammed her shoulder into the door to break it down.

Generally, I’m not a fan of first person point of view but it worked really well in this story. For me, it was a seamless read. I felt right in the middle of the action. I worried when Nate worried. When he got angry, so did I. And toward the end, when he was ready to make his sacrifice for Tess, I knew it was coming and I kept believing in the power of their love. Cuz I’m a sucker for True Love. And I’m glad I am.

This book was provided by Netgalley for an honest review. No other compensation was offered or received.